It has been a lovely day. I have felt such ease and none of the undercurrent of agitation I feel throughout the summer. It has felt almost autumnal today and I spent the day savouring the feeling.

I started a novel this afternoon (The Great Alone by Kristin Hannah). It's about a troubled family who, in 1974, go to live in the Alaskan bush without the proper skills and with very little money. After I'd read through page 164, which is the end of the first part, I looked up, blinking, and had to get my bearings. I was transported right back to Alaska and could visualize the landscape and the seasons, even though we didn't live in the bush and were in a different part of the state. As the author described the people, the light in summer and the dark in winter, the adaptation that's required to live a different kind of life, I was right there in that world.

At that point, which was just after an intense scene, I needed to do something else, so I made some chowder for supper. It's not something I usually make in the summer--especially not this one--but today was cool enough and I wanted to use some stuff up.

Now it's about 9:30 pm and we're having a cup of tea and some wholemeal raisin toast, which also reminds me of autumn, since I made it with cinnamon, ginger, and allspice. 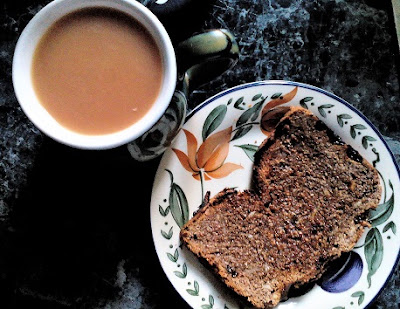 And just to top it off, the coal man just stopped by, saying he used to sell coal to the woman who lived here. Bill said she moved. Coal Man asked if we burned coal. Bill said no. 'Maybe when it gets colder,' Coal Man replied. 'Maybe,' Bill said. Coal Man said he'd come back when it's colder. We're not going to burn coal and we never even put the heat on until the end of November, so when he shows up again, we'll politely decline. The idea of the fire makes me think of autumn, too, but then again, the local shop had a stand outside containing bags of coal and briquettes all through the heat wave. Fires happen all year here.

The only drawback to the rain we had yesterday, last night, and today is that it was too cloudy to watch the eclipse last night. I checked a few times in case there was a well-timed break in the clouds, but there was no moon to be seen.

I might do a bit of cross stitch tonight as I listen to the wind rustling through the leaves. I hope it's a peaceful day for you today in your part of the world.
Share
Posted by Shari Burke at 28.7.18

I love the photos! Am reading the great alone-I usually get up early and read a book a day-been tired lately and learning about folks on some of these blogs! Also need to begin two afghans for the boys and maybe get back into counted cross stitch if the cataracts allow!!
Just love your blog-we have much in common!!