I finished getting the last of our stuff in place this afternoon. All I had left was small stuff to hang and put on the mantel. I suppose we'll move things around a bit as time goes on, as you do, but for now it's done and dusted.

I have to chuckle as I look around and see how much of what we moved was sea glass, shells, rocks, and driftwood. We brought bits of Moville with us.

Almost all of the driftwood was found by Bill on his walks and there are such interesting shapes and textures... 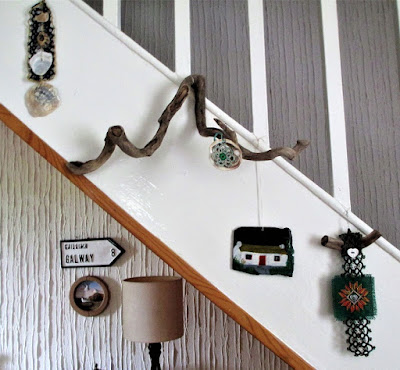 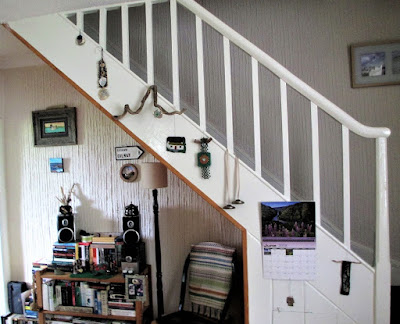 ...and many different sizes 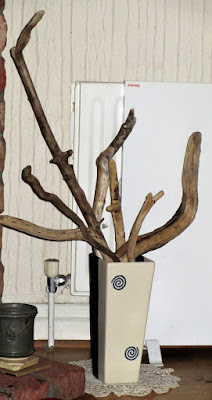 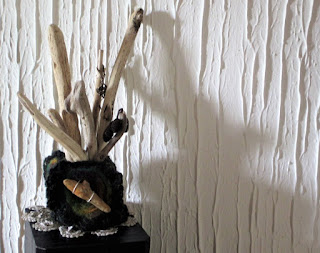 We saw the tall vase in the charity shop the other day and we both liked it. We stood on the footpath discussing what we would do with it if we bought it. I thought of sticking some of the larger driftwood in it, so it came home with us. The basket on the bottom was a project I did last autumn using some multi-coloured roving. I needle felted ovals, crocheted around them, attaching the pieces as I went, and then attaching a very small piece of driftwood to one, and rocks on the sides. I planned to put it away once autumn was over, but Bill wanted it to stay out, so now it has a new spot on top of a speaker.

There was also a really nice bowl in another window of the charity shop, but we could not think of where we would put it or how we would use it, so we left it there.

I think I'll make a nice cuppa in a little while, and sit here, surrounded by my rocks and driftwood and lose myself in a book. I hope your day is peaceful, with many moments of quiet joy.