We're having a break from the sun today, for which I am ever so grateful. When we went out this morning to do some errands, it was chilly and quite windy--very brisk. This will not last long and we'll be back to too much sun and too much warmth, so I am enjoying this reprieve while it lasts.

I made a batch of orange blueberry muffins this afternoon. They're really tasty and very healthy and they'll be nice to have around as I bury my nose in books while avoiding the sun in the days ahead. 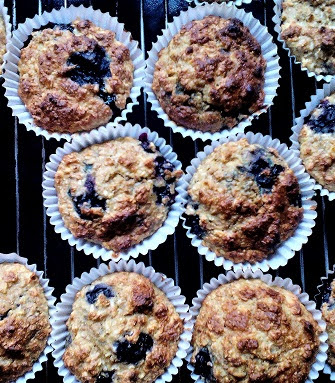 Here is the middle part of April's book list

The Thirteenth Tale by Diane Setterfield
Vida Winter is a successful novelist and story writer. One of her books was mistakenly published as Thirteen Tales of Change and Desperation, but there were only twelve tales in the book. Many people have tried to find out about Vida and to write her biography, but she has been uncooperative. Now she is terminally ill and wants to tell her story. She writes to Margaret Lea, who, with her father, runs an antiquarian bookshop and who has written a monograph about a set of twins. Twins figure heavily in this book, which is characterized as a Gothic suspense novel. It has been made into a film, apparently, which first aired on BBC. It was a good book and I liked it well enough in spite of the sometimes convoluted plot. It felt like it could have been slightly shorter and I felt a bit exasperated when pages were devoted to a extended excerpts from the former nanny’s diary near the end. I found this book at charity shop somewhere and it will go into the wee free library now that I have read it.

Women and Power: A Manifesto by Mary Beard
Mary Beard is a classicist who, in this slim volume, discusses how misogyny and the cultural disempowerment of women can be traced in part to Greek and Roman cultures. These were lectures that were adapted into written form. What I especially liked about this is the ways in which she goes beyond the superficial and shows how misogyny is deeply cultural, has a history, and is, in many ways, operating below the radar. The problems women face are not going to be easily solved and if there is any hope to do so, we must understand where this stuff comes from and to do that, we have to go beyond the superficial.

The Textile Reader edited by Jessica Hemmings
This is a wonderful collection of writings about textiles and covers many different genres and topics. The easiest way to describe it is to quote from the introduction.
‘It is fair to say that this Textile Reader is as concerned with how we write about textiles as it is interested in what we write about textiles. Contributors range from artists and designers to fiction authors and historians. The familiar essay form sits beside interviews, lists, short stories (some a paragraph in length), artist’s statements, and blogs. The content contained within these genres is eclectic with the intention that familiar thinking is placed alongside more contentious approaches.’ I was more interested in some pieces in the book than others, of course, but overall I found it to be well put together and full of interesting writing. I enjoyed it a lot.

Village School by Miss Read
This is the first book in the author’s Fairacre series, first published in 1955. The series ran until the 1990s, I believe. Miss Read had been recommended to me a few years ago by a couple of people, so I looked her up in the library. At the time, this was the Ballinrobe library and they had a few of her Thrush Green books, so I requested them and liked them. Last year, I discovered more Thrush Green in the e-audiobook section of the library, so I listened to those. A while before that, I’d come across a 3-novel volume of the Fairacre series in a charity shop, so snapped it up. The narrator is mostly Miss Read, the headmistress and teacher at the school in Fairacre, a small English village. This book was structured by the school terms, beginning in autumn with the Christmas term and ending at the start of the following summer. I found this book a bit tedious at times, since it was heavily focused on the school. I almost stopped reading, but carried on because I’d enjoyed her other books, offering as they do a quiet excursion through a small village and the quirky characters that reside there. I’m hoping that the next two books in this omnibus edition are better and have less to do with the school and the children and are more wide-ranging.
Share
Posted by Shari Burke at 1.5.18