Sadly Spring, But at Least There Are Books

We turned the clocks forward last weekend and it's been a very unproductive week. I always need a while to adjust to the spring time change anyway, and all my usual spring and summer problems have arrived right on schedule. I am not sleeping as well, am tired, have the usual seasonal depression, aches and pains. All of this should go away about 6 months from now. In the meantime, I'll eventually get used to it all as I do every year and get onto the rhythm of dealing with it and getting stuff done anyway until we get past the yucky spring and summer months. Until I get used to it again I just gave myself permission to get the basics done this week and that's it.

I've not done much stitching or reading this week, but I did get sick and tired of seeing a scrap piece of cross stitching sticking up from the end of a book. I'd stuck it in there when we moved house last year and there it remained. I'd taken a narrow scrap of black aida cloth and made random cross stitches with scraps and ends of thread--I wanted an abstract design with a piece of sea glass. I'd had the glass with the piece but when we moved, it got put with all the rest. Rather than look through it all, I grabbed a piece that was in a plant pot, washed it, let it dry, and used it. So now this small piece is finished and the book has nothing sticking up from it. 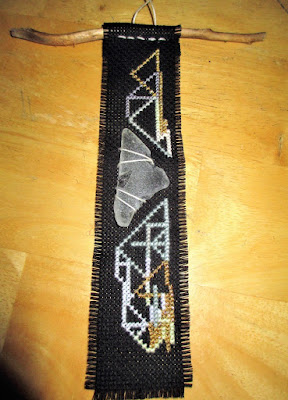 Although I haven't read much this week, I had some good books to read earlier this month. Here's the first part of the list.

The Stories of Muriel Spark
This is a collection of Muriel Spark’s short fiction. Many of the stories involve Brits in colonial Africa and the tensions between the colonizers and native people, racism, and the attitudes of the Brits who lived there. Funny story about this library book. I'd returned it a week and a half before it was due, but then the local library was unable to access the larger system, as the ISP--the dreaded Eircon--had a problem. When asked what the problem was and when it would be fixed, the guy said he did not know. Typical. So the books piled up for two weeks because the librarian couldn't check them in. I happened to be there after the system was fixed and he was scanning it in and when he opened it, I noticed a couple of things I'd stuck in there and forgotten about, so I was able to retrieve them.

The Case of the Unsuitable Suitor by Cathy Ace
Having read the first and third (the library e-book section does not have the second) books in this new-to-me cosy mystery series, I decided to reserve the fourth. This seres revolves around the WISE Enquiry Agency, so named because the four women who founded it are Welsh, Irish, Scottish, and English. There were two unrelated storylines/mysteries in this book. One takes place in the Welsh village where they all live and work and the pther takes place in Northern Ireland, where one of the women is on holiday with her partner at the ancestral family home. One storyline was more predictable than the other. I find these books pleasant to read and will read the next one if I come across it whenever it is published.

The Wisdom of the Buddha--Anne Bancroft, ed
This is a collection of sayings of ‘the’ Buddha, taken from various texts, sutras/suttas. It is divided into categories, like love, kindness, society, practice, etc. It’s a nice little collection.

Now I am off to take an aspirin in the hopes of losing this headache/face pain. Spring. Bah! Humbug!!
Share
Posted by Shari Burke at 30.3.18