Emma the Fierce and The Rest of the Book List

We did not get any additional snow from Emma overnight, but the wind was fierce! Still some major gusts happening, but there is a wee bit of melting going on. Other parts of the country got slammed with snow as well as the wind and are digging out today. I heard a woman being interviewed on the radio this morning. She works in the catering department at the hospital in Cork, which is at the other end of the island from where we are. She walked for two hours to get to work and plans to be staying at the hospital tonight and possibly beyond so that patients and staff have their meals. Other members of her staff are doing the same. They are unsung heroes, for sure!

The concern in some areas now is for flooding, if the snow melts too fast. It looks like it will be slightly warmer, but still cold, so that melting will be gradual in most places. That's good.

Here's the third (and final) portion of the February book list.

A Day in the Death of Dorothea Cassidy by Ann Cleeves
This is the third book in the author’s Inspector Ramsay series--out of print for a while and now reissued as e-books. In this book, the vicar’s wife, Dorothea Cassidy is found strangled in a park flower bed and Inspector Ramsay and his arrogant sidekick, Hunter, set out to discover whodunit. The ending of this one was a surprise.

Still with the Music by Karl Jenkins with Sam Jackson
This is an autobiography of Karl Jenkins, the Welsh composer. I wrote more about this book here.

Light on Distant Hills: A Memoir by Cathal O’Searcaigh
The author (born in 1956) is a poet who grew up on a hill farm outside the small village of Gortahork in County Donegal. His first language is Irish and although he learned English as a second language, he realised that his poetry needed to be written in Irish if it was to be any good. This is the first book he wrote in English. In the book, he covered the early years of his life through young adulthood, including such topics as the area in which he lived, his neighbours, their way of life, his growing passion for words, moving to London for a time before returning home, and how he settled into life as a gay man.  I found the book in a charity shop and bought it because it was a memoir about life in Donegal. I’d not heard of the author before, but I guess he’s a pretty well known Irish poet--at least in some circles.

Bullets into Bells: Poets and Citizens Respond to Gun Violence Dean Rader, ed
This is a book of poetry written by well known and lesser known poets alike that are addressing gun violence. Each poem is followed by a response from someone who has been impacted by gun violence in some way. I found this e-book on the library website and borrowed it. Then the latest school shooting unfolded in Florida. I downloaded and read the book after that, and it was heartbreaking to see the same things happening again and again.

Thon Ulster Scots Book by Liam Logan
Bill found this book in a pop-up charity shop about a year and a half ago and thought I’d like it, so he brought it home. I did like it. It’s a guide to the Ulster Scots dialect of English that is spoken by some poeple in Northern Ireland. There are some pages written entirely in this dialect, a poem about the calendar and the annual cycle, and others that are more explanatory with examples of how the dialect is used. ‘Drapping prootas,’ for example, is ‘dropping (planting) potatoes.’ He describes individual words as well as sayings, like ‘Keep yer wun tae cool yer parridge!’ This means, ‘Keep your wind to cool your porridge’ or ‘Don’t waste your breath giving advice.’  The one thing I did not like about the book was the way it was produced. The pages are thick and glossy and there are gorgeous photos of nature, but the text is often on top of the busy photo and difficult to read. White text across a cloud photo is not the best choice. Other pages had text that did not work well with the background colour. There was one page where they placed a box behind the text, which made it stand out from the background photo--they could have used more of that. Happily, many of the photos had a page by themselves. 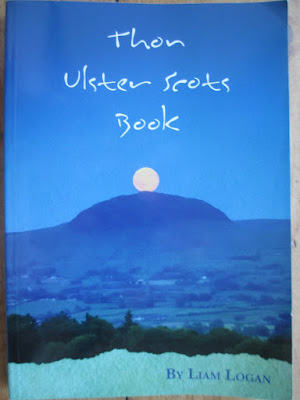 Joining the Dots: A Woman in Her Time by Juliet Gardiner
The author, a social historian, describes this book as a fragmentary memoir. In it, she recounts some of her own life stories and ties her experiences to what was going on in the UK at the time. She was born in 1943, so there have been major sociocultural changes, particularly for women, during that time. Each chapter focuses on a different aspect of life, such as education, marriage, work, motherhood, and begins with her personal stories before widening out to describe the context in which this was playing out. I’d not read any of her previous work, so when I came across this in the e-book section of the library website it was the title that caused me to click on it and read more. I liked the way she structured this book. It worked well as a combination memoir-social history. It was a good read.