A couple of weeks ago, when the news was full of coverage about the abuse suffered by so many young women on the US gymnastics team, I was feeling sad and outraged, but also so impressed with the strength, dignity, and courage of those women--all of them. Then that night, John Creedon played an obnoxious song on his RTE Radio 1 show and I'd had enough. After I was finished yelling about so many men and their sick feelings of entitlement towards women's bodies, I went upstairs and crawled under the blankets. After putting on some soothing music, I picked up my cross stitch pouch and discovered a needle already threaded with some red thread left from a previous project. I rummaged around and found a scrap piece of aida cloth that was just the right size on which to stitch RESIST, so I did. I felt better.

The next day, I grabbed the last little piece of the black roving with iridescent threads that was in the 'posh scraps' Bill found for me several months ago. I got out my needle felting supplies and stabbed, stabbed, and stabbed some more until I had a nice little circle. Then I sat there with wee bits of fabric and metallic pieces cut from tops picked up at the charity shop and played around with placement and layers on the circle, sewing them on when I had an arrangement I liked. I sewed a jewelry pin on the back and crocheted a border. 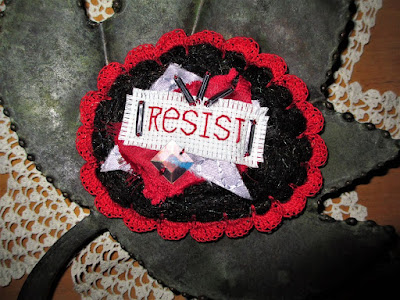 As I was making the pin, I knew exactly who needed to have it, so I posted it to my sister-friend in the US. She received it the other day and she loves it. Yay!

I have learned to never underestimate the ability of crochet hooks, needle and thread, and a bit of roving and the needles with which to repeatedly stab it to calm me down, brighten my mood, and generally make me feel better during those moments when negative emotions arise and want to hang around.

Here's hoping that if negative emotions arise  for you today, they don't stick around very long.
Share
Posted by Shari Burke at 8.2.18

What a wonderful project. I know exactly what you mean- I thought that whole slew of violations was just sick and perverted. I hope they do to him in prison what he inflicted upon other. Predators in prison cells are the lowest of the low.