This Too Shall Pass

A while back, my sister-friend and I were exchanging emails and were talking about how things happen and things pass. 'All is impermanent,' I said. 'Yes, I have to remember that saying about this too shall pass,' she said, 'I need to find a small thing that says that to hang on the wall.' You know what happened next. Ideas began to whirl around my head. I graphed out words with the intention of cross-stitching the saying and going from there. It wasn't right, so I worked on other stuff and let the whirling ideas settle and present themselves one at a time.

I decided to start with the foundation, so needle felted some black roving with iridescent threads. Her favourite colour is red, so I crocheted a red border. Then I started on the words. I tried a few different times to embroider the words directly onto the felt. Didn't like it. Ripped out, not once, but four or five times. Then I decided to try simple, small words on a scrap of aida cloth. That worked. I attached it to the felt and set it aside until the next morning. I rummaged through the sea glass and the button tin and started sewing stuff on. I remembered a shirt with a highly embellished collar that I'd picked up on the 50 cent rail at the charity shop and cut off a small metal piece to add. Finally, I grabbed a brass ring that had been baked into the Halloween barm brack and sewed it on the back as a small hanger. 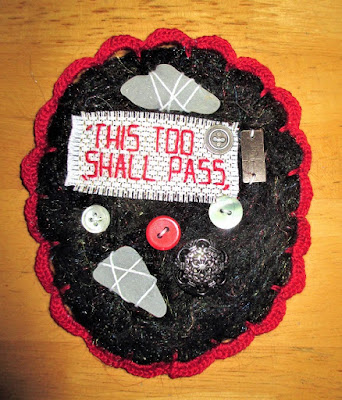 I really enjoyed the process of making this and it gave me some ideas for other wordy projects I've been kicking around for a while. 😀

Hope you have some creative stuff to think about and work on, too!
Share
Posted by Shari Burke at 10.11.17