Before cooler weather showed up, Bill mentioned that he'd like to have another pair of fingerless gloves. I made him a pair a few years ago and he wears them all the time for a good part of the year. They do come in handy--I wear various pair a lot, too. We both get very cold hands and fingers and we find that the gloves really help a lot.

I thought a bit about which yarn to use. The other pair I made was knitted in sock yarn, so they are thin, which is good. I did not want to make them in thick yarn because I thought they'd be too bulky for regular daily use. I considered sock yarn for the new pair too, but in the end went slightly thicker--not much though. 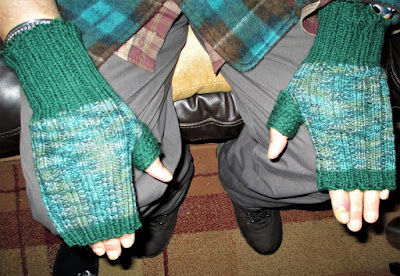 I had a skein and a bit more of the variegated green/grey left from a hat I crocheted for Bill a few months ago. 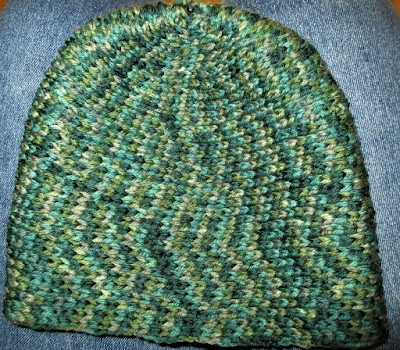 I wasn't sure whether it would be enough by itself, so I used the forest green for the cuffs and at the top. As it happened, I would have had enough of the green/grey, but I like them with the forest green, so it worked out OK.

To make them, I cast on 48 stitches with US size 2 double pointed needles, joined and worked in the round (on 3 needles with 1 working needle). I did a 2x2 rib until the cuff was long enough, then switched to the green/grey and continued doing k2, p2 around and around until I got to the spot where I wanted the thumb hole. Then I worked back and forth, still in 2x2 rib, turning the work at the end of the third needle. When the thumb hole was big enough, I went back to working in the round. I crocheted the thumbs instead of knitting them, because I did not want to be fiddling with the dpns for such a small area.

On the thumb hole section of the second glove, I was not paying attention and was turning in the wrong place, so I ended up with one section not growing and I had to tink (knit backwards) in order to fix it. I was glad when that was done! Next time I'll pay closer attention! 😏

I shifted some yarn around today, putting away leftovers from a couple of finished projects and gathering yarn for a few more. One is on the needles, the hooking will start on another one tonight, and the hybrid project will probably be started tomorrow.

And so a new week begins! Hope yours has started off well!
Share
Posted by Shari Burke at 27.11.17