Months ago, someone gave me two huge skeins of white yarn that is an acrylic/wool blend. It's about a DK weight and at 900-ish yards in each one, there was a lot of it! She also gave me a skein of forest green that was slightly thinner and not as large, but there was still plenty of yardage. A few months later, a friend brought over a big bag of yarn that included a large skein of what the label calls 'paddy green,' and skeins of red, dark red, and a green-white variegated. I had been wondering what to do with the white, because while there was enough there for a big project, I was not feeling the love when I thought about large expanses of white in an afghan, shawl, or poncho. The other colours were perfect to go with some white and I decided on a simple blanket wrap--I can use it either way. In order to avoid the large areas of white, I opted to cut the yarn at the end of each row, leaving the tails at either end as fringe. I chose to do a very drapey stitch combination of single crochets with ch3 in between. The single crochets are very shallow, so the chain 3 loops stack up right on top of each other, providing warmth while not being too heavy or bulky. The paddy green, variegated green, and the reds were slightly thicker than the white and the forest green, but it didn't matter in this project. I used a 6mm hook. 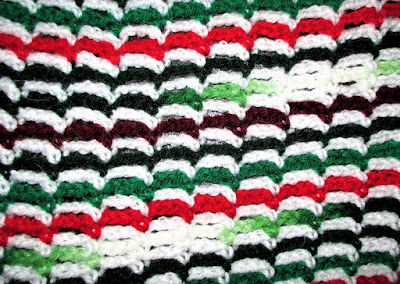 Since I had so much white, I used that for every other row. I had a lot of the greens, too, so I used them more often and scattered the reds around a bit more. I love it!

I did not even use one full skein of the white and I have scrap balls of the other colours left that will be used in a future scrappy project. I've cast on a hat in the white so I can try out an idea I had. I will decide some other time how to use the rest of it.

Oh that is delightfully Christmassy (if such a word exists!), and very practical too as the weather is now so much colder. Best wishes to you both.
Lesley

Thank you Lesley! I love shawls, wraps, and blankets/afghans--so cosy! I hope you're enjoying the season :-)