We went up to the garden this morning, just to check on stuff and water the plants in the hoop house. We'd not been since Saturday. We'd planned to go Tuesday and then yesterday, but the days got away from us. When we arrived, there was someone already there. He said he'd watered our plants because they looked droopy. That was nice of him! Turns out he is the fellow who decided to try growing lettuce through the winter in the hoop house. He was successful. There s a lot of lettuce. He offered us some and gave us two heads. I asked him if he needed any cabbage plants, since we had extra. The only ones we could buy came in a pack of 10 or something. I planted 5 and that seems like plenty. As it happened, he was just going off to buy cabbage plants when he was done at the garden, so he was pleased to take them. He told us he had extra spuds ready to be planted if we wanted some. At first, I had no idea where I would put them, as it seems like all our space will be accounted for, but then I decided we might as well plant a couple, so we did. I can figure out places to put stuff as we go on.

At the moment, most of the stuff going outside is still in the waiting to sprout (courgette/zucchini), just sprouted (chard, spinach, broccoli) or will-be-planted-when-warmer (beans, carrots, lavender) stages, so there is a lot of free space.

Inside, the tomato plants are growing like mad, the French breakfast radish seeds have sprouted, the coriander(cilantro) and lettuce seeds that sprouted last week are growing, and the fennel is taking off, as is the parsley. Things seem to be going well--at least well enough for me to pick some stuff to go with the lettuce for a salad. 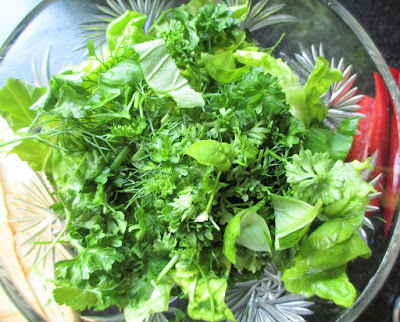 . This was the base of my lunch salad--lettuce, parsley, fennel, and basil from the garden, along with scallions and celery from my pots at home. I added a few other things to this, so it is not completely home grown, but those fresh greens were so delicious!

What a nice, unexpected treat! Hope your day contains some happy surprises too!