We walked up to the garden again this morning to check on things, to water the stuff in the hoop house, and to plant some seeds in pots. The stuff we've planted so far was mostly looking good. A couple of plants were a little battered from being shoved in a bag and carried home from Buncrana, but there is new growth coming, so they should be OK. 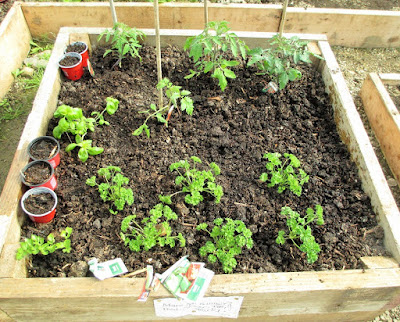 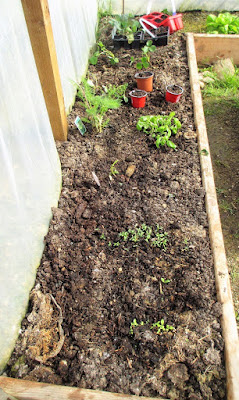 Most of what we've planted so far has been in the hoop house. In the outdoor bed, we have some cabbage plants at one end along with a few cauliflower seeds (we will plant more of those next week) and a couple of strawberry plants at the other end. Inside, we have 6 tomato plants, two basil plants, 3 strawberry plants with one more in a pot which will have to go somewhere, a celery regrowing from an end, some fennel that has taken off after wintering on our window ledge at the apartment, and a bunch of parsley, one or two plants of which might be repotted and plunked out back of the house if I end up needing the space in the bed! I've planted seeds in the beds--French breakfast radish, leek, lettuce, and coriander (cilantro) and in pots to start--chard, spinach, broccoli, courgette (zucchini), bell pepper, and jalapeno. The last two will be planted in the hoop house if they come up (I have never had really good luck with peppers). The rest will go in the outdoor bed, but I just left the pots inside for now, hoping they'd germinate faster in the 80 degree heat of the hoop house than they would outside. Also going outside once it is a little warmer will be carrots, beans, and lavender.

The apple trees in the garden area are blossoming--so pretty. 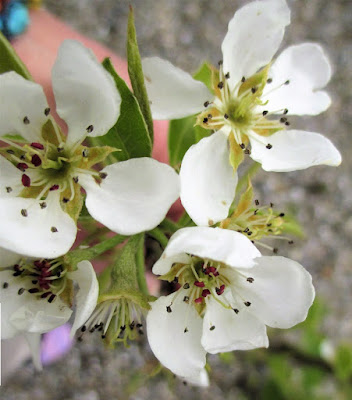 I also have some stuff growing out back of our house. I like having stuff in pots and I have to get some bigger ones and some more dirt. I am also considering trying to lug home a big bag of dirt or two, cutting holes in it/them, and plating directly in the bag, letting the plants cover the bag. I have lupine seeds and want to get more flowers and other plants, but I am waiting until I get some help from someone who knows what they are doing (hi, Karen 😊). I will also plant some of the lavender here. I have oregano seeds to plant as well.

For now, the stuff that is already there is coming along. The wild rocket seeds I planted have sprouted. The chocolate mint and lemon balm which died back over the winter have started growing again. The parsley that wintered on the window ledge with the fennel is growing. My scallions are growing and I have more ends in water inside the kitchen on the windowsill, along with rosemary, another celery, and more parsley, all of which are growing.

When we went to the garden centre a few weeks ago I got a tray of pansies to put in a window box on the front window ledge. I had one that would not fit, so I planted it in a pot out back--I like looking at it as I work in the kitchen. I love that purple! 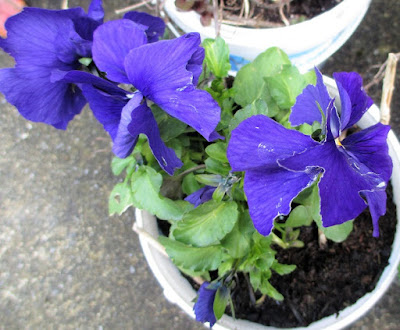 On one visit to the garden, someone gave us some lettuce. The roots were still attached, so I put them in water, used the leaves, and planted the rest out back. They are growing nicely, as is the parsley. The only available parsley plants at the garden centre came in a pack of 8, so there is plenty. I use it a lot though, so that's OK. Pics are out of focus, but you get the idea. 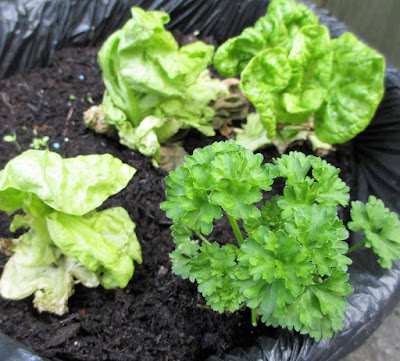 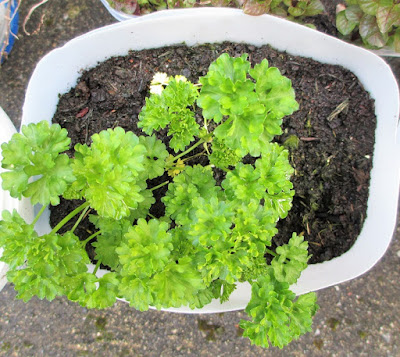 Growing, growing, growing. Won't be long now before I have a salad made mostly of stuff that has been growing right here in our wee pots and plots.