This afternoon, I was sitting comfortably on the couch with my cuppa next to me, settling in to type a completely different blog post than this one. Then we had an immersion incident and the day went off in an unexpected direction.

When we moved in here, I went into the hot press (these are closet spaces that may or may not contain shelving, but all are storage areas in which the immersion also lives) and noticed a bit of water on the floor under the immersion (water heater) and against the wall. It was not a lot of water, but that area of the floor was wet and looked like it had been for some time. I got a torch, since there isn't a light in there, and I checked the pipes, which were dry. Then I bent down to look under the immersion and sure enough, there was a water-stained slat on the shelf it sits on, and a single drop of water hanging from it. We went down to the letting agent's office to let them know and the woman there said she would get in touch with the plumber. Later that day, she called me and said he would be by the following day.

That was two weeks ago and this morning, the floor was still wet and there was still a single drop of water hanging from the slat. We went by the office again and as soon as we walked in, she asked me if we'd heard from the plumber yet. I said we had not and that was why we were there. 'The immersion works fine, but I am concerned about damage to the house, even though it is not much water.' I told her. She said that she had called the plumber 4 times and she said she would call again while we were in the office, which she did. She asked him if he could come by the house and take a look. He said he would be here today. She told us that if she did not hear from him by 4, she would call him again. We went to the grocery store and the organic farm store, came home, and proceeded with our day.

Just as I was settling in to write my blog post, the phone rang. I assumed it was the letting agent's office, but our mobile phone coverage is crappy here, so when I answered, there was nothing. Then Bill's phone sounded. Same problem. He went outside to try to connect and I went into the other room for something. When I came back into the living room, I heard voices and realised that the plumber must've come. He and Bill were upstairs. Bill was pointing out the problem. And then the floodgates opened!

I sat here listening to water gushing and wondered where it was all going. I soon found out that it was running across the upstairs landing and down the stairs. Bill came down to get the mop. The plumber asked if we had old towels. I went up and got some. When I came back downstairs, I discovered that water pouring from the light fixture in the kitchen. I got a bowl and an old pan to catch the worst of it. 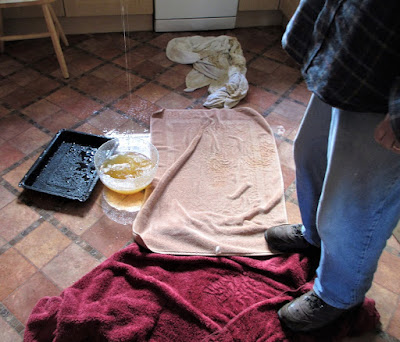 Bill and the plumber were soaking up water upstairs and on the stairs.

Then I got a little lesson in plumbing and, I guess, chemistry. As soon as the plumber went to take off the insulating blanket to look at the immersion, the water started flowing. Turns out that blanket was the only thing holding it all together and this could have happened at any time. I am sooo grateful it happened while the plumber was here and not at 3 am in the middle of a holiday weekend!! He told us that the person who installed the immersion, in an effort to cut corners, used iron fittings instead of brass. The iron ones cost a euro and the brass 4 euro. But the iron and the copper do not play nicely together, so the whole thing was rusty and corroded.

Once he moved that blanket, the piece just fell out of the hole and the thing emptied itself. It is a good thing it is small! He said that in his 15 years of being a plumber, he had never had anything like that happen. Now he has a story to tell.
The plumber left to report back to the letting agent and to get a new tank. The water was still dripping from the light fixture in the kitchen and from the light switch by the door into the utility room, but it was slowing down. Then the power went out, which is good. We were thinking that we should have an electrician check things out, so I walked down to the office to tell them while Bill stayed here and waited for the plumber to come back. She tried one electrician, but he did not answer. She tried another guy, but she was not sure whether he was in town or off working in Sweden. Turns out he was around, though not at home just then. His wife expected him back a little after 5, so she asked if he would call in to us--he lives just a little way down the road from us.

I came home and the plumber was back with a new tank. He felt it was safe enough to reset the circuit, which he did, but suggested an electrician should look at it. He put in the new immersion and did what he needed to do. He was putting stuff away when the electrician appeared. They chatted on the pavement (sidewalk) and the electrician came in. He had the plumber show him what he'd done. Then he checked the switch and the light fixture. He showed us what all the circuits are for and explained to us what had happened. He looked under the sink and said some corners were cut. Then he asked to see the hot press, so I brought him up and he showed me where things had been 'grounded to the earth.' He said there should be a similar thing under the sink, and they'd cut corners, but it was safe because we had the ground in the press. He told us everything was fine at that point.

We were happy to have had a professional person look at it--if we had not had him come, I would have wondered whether I was going to zap something every time I flipped a switch or plugged something in!

By the time all of that was finished, we were getting hungry, so we went to The Cosy Cottage and had some supper. I even got myself a caramel square to go--it will be lovely with my coffee later. They make the best caramel squares I have had.

The first day of spring was an eventful one, but at least it is all sorted now. Tomorrow, I wash towels!

I've read so much stuff about living in Ireland that talks about the "immersion." Now I even know what one looks like. But thank goodness the plumber was there when all that went south! You earned that caramel square!

I know! I was so grateful it happened when it did. I shared the caramel square with Bill, but I enjoyed every bite--they are so good!