It begins. We got this ad in the post today from SuperValu. It is that time of year--first ad for Halloween stuff. Bottom half of the page is the first Christmas ad--get your biscuits early! 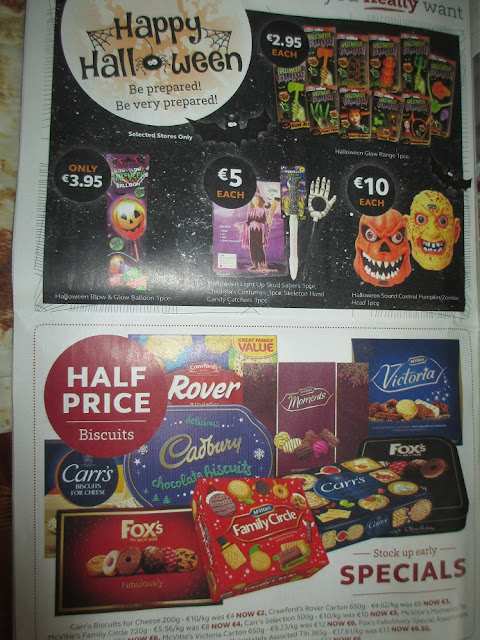 Seeing this reminded me of our early days in Killybegs. The SuperValu there still had some of the Family Circle biscuit boxes left, so they were on clearance. On several stops there during out first weeks we bought a box, and when it was clear the supply was almost gone we bought two. By the time we were finishing the last box a few months later, I was kind of sorry because they had some good biscuits in there. We rarely eat biscuits these days, but I am always happy to see these ads appear because it means we are getting very close to my best time of year. What I am waiting for is the brack. That should be out soon. You can get it in some bakeries and tea shops throughout the year, I think, and it is good. This kind is like a moist loaf cake with lots of raisins. I like this kind, but am more partial to the kind I first had, which was from the SuperValu in Ballinrobe, which is a yeast bread--it tastes like the cinnamon bread with raisins you can get in the US--and each loaf has a ring baked inside. Love the bread sliced and  toasted with butter. That should be showing up any time now and when it does, I will buy a loaf.  Funny that in Ballinrobe that first year, I bought it, tried it, loved it, and bought more. When the next loaf was gone, I bought more. I probably bought a loaf a week through October and then I was tired of it. Last year in Killybegs I bought a loaf and then another the following week when that was gone. By the time I was done with that, I had no desire for more. I wonder whether I will get beyond one loaf this year. Guess I will find out.

Your comments about brack reminds me of my days in "da Region" (NW Indiana near Chicago) where Lent meant paczki, a traditional Polish pastry made around Mardi Gras. Imagine a filled donut, but make it much lighter and more delicate - quite a revelation for a gal from the Great Smoky Mountains who had thought the ultimate in donuts was Krispy Kreme. Like your brack, paczki was a seasonal deal; if you didn't get to the bakery right around Ash Wednesday, you missed your paczki for the year - and that was a very sad thing.

Sounds delicious! Many towns here in Ireland have large Polish populations. In the first Irish town we lived in, Ballinrobe, I used to be able to get big bags of frozen pierogies around Easter. I had a big enough freezer to stock up and I did. Once we moved away we did not see them anymore. Nice to have seasonal treats to look forward to--they mean more because they are only available for a little while.