The Growing Piles of Yarn and Yarn Stuff

I'd been planning (I use that word loosely) a trip to Buncrana and a stop at Lidl for weeks. We have done quite well stocking the cupboards for winter, which we did at Aldi, since they are more useful for us overall. That said, there are a few things that we can only find at Lidl so I had decided that the next time we went to Buncrana or Letterkenny, we would stop there. I was not interested in some of the more exotic frozen foods they have there, such as kangaroo leg steaks and ostrich steaks, but I love their cauliflower patties for when I need something quickly and their caramel waffle biscuits. The sun dried tomatoes are worth picking up too, and they have some of the basics that we use.

The reason we opted to go this week though, was that they had sock yarn in stock. Like Aldi, Lidl has a seasonal section in the store and at certain times of the year, certain things are stocked--potting soil (called 'compost' here) in spring, fire supplies in winter, and, to kick off autumn, art and craft supplies. They had paints, canvases, sewing supplies, brushes, and yarn. They had a few different kinds of yarn, but I was only interested in the sock yarn. Early in the year they had a different kind of sock yarn that was a blend of cotton, wool, and nylon. I got a bag in each colourway. Each bag contains 4 skeins of 50 grams each and all the skeins in the bag were the same multicoloured skeins with short colour changes. I used 6 skeins of the 16 that I got then, making a couple of pair of socks and a couple of hats. It's good summer yarn and I was happy with the quality of it.

This time the yarn is wool and nylon and in more subdued colours. I was also thrilled to see that the bags of 4 skeins contain 2 jacquard pattern yarns and two coordinating solids. I love the self striping and patterning sock yarns--they are fun to work with and give great results--but solid sock yarn is not so easy to find here. You cannot get an effective result when trying to combine things like self-striping yarn and cables or certain lace patterns because the stitches get lost in the colours and patterns of the yarn. And I have solid colour yarns that are the same weight as sock yarn, but they have no nylon content and would not wear well, so I could use them for cuffs, but not feet.

They had blues, browns, and blacks. 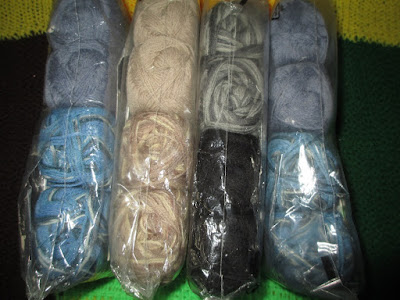 I paid 20 euro for all of that. Equivalent sock yarn would have cost me 80 euro in a shop/online.

I got two packs of blue because I knew I was probably going to be using a skein to make Bill a hat. He had told me that he wanted a hat like another hat I had made him as far as construction goes, but he wanted a blue one that was not lightweight. So I asked him about using a strand of the solid denim blue sock yarn with a strand of this vintage navy blue wool that a friend got for me in a charity shop in Donegal Town. 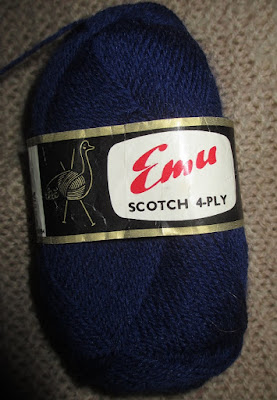 That was OK with him, so I began. 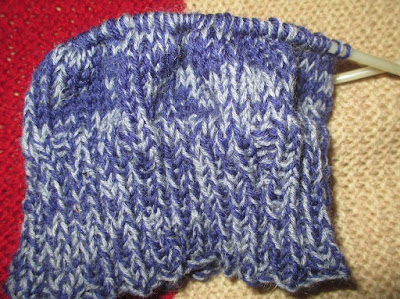 I should be finishing it this weekend. I should also be finishing the scarf I started with some of the yarn Bill surprised me with last week. I will be casting on a second wool/mohair winter sock once I am done with those two projects and I have a crocheted chenille poncho in progress too.

It feels like autumn now and that always makes me feel energized--and more enthusiastic than usual about making warm and woolly stuff. I suspect there will be plenty of socks in the mix.