For our simple Saturday and Sunday supper this weekend I made a pot of vegetable soup, which I ladled over tortelloni. This was accompanied by wholemeal soda bread and cheese. 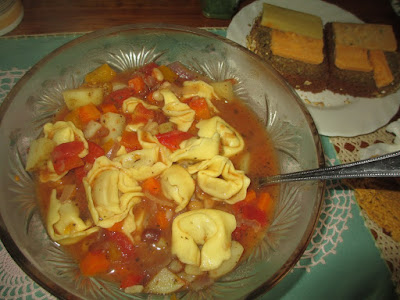 The soup was very quick to make. Into a puddle of olive oil (what else?) I put sliced onion, chopped garlic, chopped red and yellow bell pepper, and diced carrots. I stirred these around in the oil for a few minutes then added some cubed potatoes. I added water enough to cover and let things cook. After a few minutes I added some basil and oregano. When the potatoes were almost cooked through, I added a can of mixed beans (brown beans, haricot, chick peas, and I think one other kind that I cannot remember now) and a can of chopped tomatoes in tomato juice. I cooked the tortelloni separately, while the soup was finishing. That's it. We have leftovers for tomorrow, so I will just heat and we will eat. Soup is so great--you can toss in whatever you want/have, so it's different every time.

We are entering soup season. Hurray! Bill commented that we will be eating lots of soup this winter--as we do. We both love soups of various kinds. There is something very soothing about a nice bowl of soup on a lazy autumn day. Hope your day is wonderful too.
Share
Posted by Shari Burke at 24.9.16