The other day we stopped at one of the small grocery stores in town and saw that they had bell peppers on clearance--each package of one red and one yellow pepper was one euro. We bought some. I use a lot of bell peppers. I'd already gotten some from veg man, so I had quite a few. Bill mentioned stuffed peppers. I decided to do a Mexican vegetarian version. 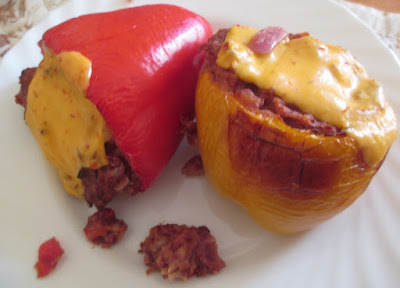 I cut a couple of large carrots into chunks and whizzed them in my little chopper. I added this to some brown rice in a pot, added water, and cooked it together.

I cut the tops off the peppers and roughly chopped the top part around the stem, adding the pieces to a puddle of olive oil in a pan. I also added chopped onion and garlic. I stirred this around until the onion was translucent and then added some chili powder, cumin, oregano, and a bit of smoked paprika to the pan and mixed it all together. I drained a couple of cans of kidney beans and whizzed them in the little chopper--this makes them nice and creamy. We sometimes see refried beans here, but when we see them they are in a small can and spendy, so I make my own. Tastes better too! I added the whizzed beans to the pan and mixed everything together. I added a splash of water to make them extra creamy. When the rice/carrot mixture was cooked, I added some of this to the pan with the beans and veggies. I chopped some pickled jalapenos and added those, along with some shredded cheddar. After mixing everything together well, I filled each pepper and stuck it in the oven at 200 for 20 minutes. Then I added a bit of chili cheese to the top of each pepper and put the pan back in the oven just long enough for the cheese to melt.

I always try to make extra when I am cooking--leftovers are handy. I have a container of the bean/rice/veggies mixture left and one of the rice/carrot. We can use the former in burritos for supper tomorrow and the rice will be used with some Thai curry over the weekend. 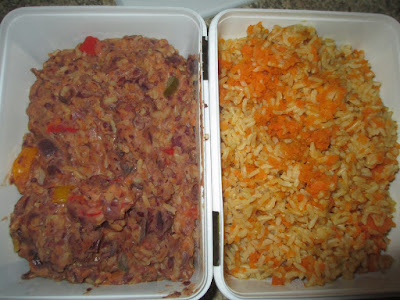 I love it when a plan comes together!
Share
Posted by Shari Burke at 29.9.16