Crocheting and Knitting at the Library

I've been chatting with Gerard (pronounced like Jared), our local librarian, for a few weeks about how I might be useful to the library in some way. Volunteering is apparently not on for various safety, legal, and union reasons, but he thought a group of some kind would be great. I mentioned a few different ideas I had about that, and said I'd defer to his far superior knowledge of what is possible/desirable given the local community culture and the library system. He said we'd try to get a knitting and crocheting group going. This makes sense because when we first moved here and did not have our home wifi yet, we would go to the library to use the computers there. On several occasions there were also women there at the same time, asking Gerard for help finding and requesting crocheting books. I chatted with a couple of them at the time.

Of course such a group is more than OK with me so I said to go ahead. He said he would start feeling people out to gauge interest and would make a flyer to display. Today he came over for tea and muffins and brought some flyers with him. 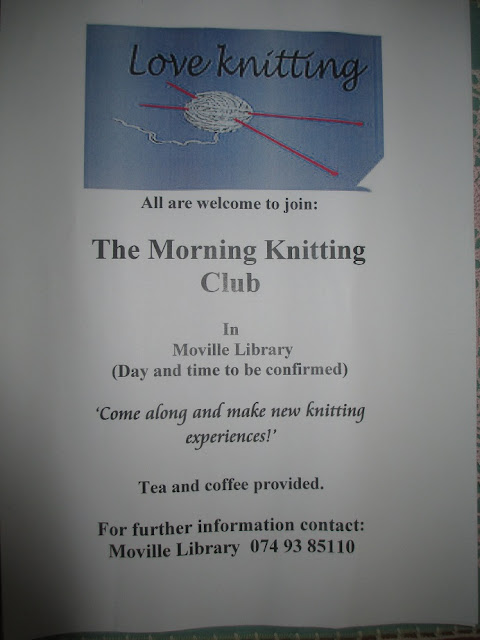 So we will see if this goes anywhere. He had a few people express an interest before he had the flyers done. One woman lives in the retirement community next door to us and wants to hang a few there. One is a part of the Irish Countrywoman's Association and wants to bring flyers to their next meeting. He just hung the flyer today, so he wants to see what happens and talk about it again in a couple weeks. If we can get at least 5 or 6 people, we will set up a time and go from there.

This whole way of sort of meandering towards an outcome of some vague sort is good practice for me. I am not used to working this way. I would be more likely to go home from our first discussion and prepare a list of goals, times, etc, before trying to organise the whole thing as soon as possible.  But that is not how things are done here and there is no point trying to force things to proceed in the ways that suit me. So I am going with the flow. It is an interesting exercise. And who knows--at the end of it all, maybe there will be a bunch of us sitting around in the library surrounded by yarn. If not, that'll be OK too.
Share
Posted by Shari Burke at 30.9.16

We've a knitting group at the library I volunteer at in Florida that has been so successful, there are 2 sessions a week. My suggestion would be to have some basic projects for beginners, but concentrate on providing a time and space for people who knit to come and do their thing in pleasant, supportive company. So often people want to do things, whether it's art, writing, a craft, but unless there is a formal time and place carved out for them, they never get that "round tuit." Work on providing that, and you'll be golden.

Thanks for your thoughts! Gerard wants to see what people want. When we talked I mentioned doing an informal stitching group and/or having things be more structured. Hard for me to know how people here in this culture view these things. He thought it best to just play it by ear and see what people want, so I will know more in a couple of weeks. Some mix of both I would expect, but I have learned to be surprised :-)