The other day I mentioned that I was having trouble deciding which library book to begin next--the Blazing World, a novel by Siri Hustvedt, or Empire of Things, which is a comprehensive history of consumerism from the 15th century to the 21st. I ended up reading e-magazines from the library that night. Yesterday I went in a completely different direction. Since we were going to Buncrana, I needed bus reading. I thought of the slim volume of life stories we'd gotten at the fete a few weeks ago. It was perfect! 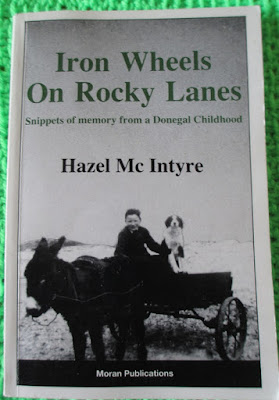 There were a lot of mistakes in the book--words misspelled and apostrophes where they did not belong, but I enjoyed the book anyway. It is simply a small collection of the author's poetry and some memories from her childhood. Some of the stories were funny--like the time her mother gave her and her brother a sixpence apiece to put in the collection basket at church. As they were walking to church, her brother told her that if he only spent three of the six pence, he could have the rest for candy. Hazel was horrified when the collection basket came around and after she'd dutifully put her money in, her brother placed his in and then took out three pence in change! Ten years later she was at the funeral for the sexton when the clergyman recounted a story about him and how amused he was once when a young lad rummaged around in the collection basket for change while his sister looked on in horror.

Another story was about the coming of the electric light. Alice Taylor has talked about this in her books and every time I read something like this, it reminds me of a conversation I had with an older woman in Ballinrobe. I was chatting with her at my neighbour's birthday party and she was telling me about how she'd gone to Chicago to stay with an aunt and uncle in 1966. She would have been in her late teens or early 20s then. She said she arrived at Christmastime and was bedazzled by all of the lights everywhere. When she'd left Ballinrobe, they had a single bulb hanging from the ceiling. Electricity--especially in rural areas--is a pretty recent thing and older people here remember living without it and what it was like when it came.

Before we left I started reading this book--Bill had requested it and was ready to return it, so I wanted to read it first. I finished it last night. 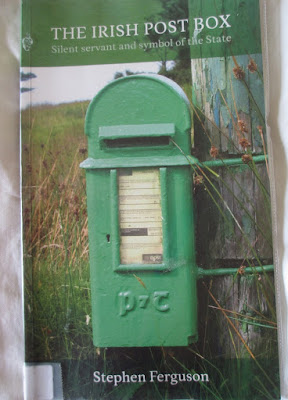 Fascinating to read how controversial post boxes were and how political they have been and can still be! It is a short but informative book with lots of pictures. Anthony Trollope was the person who brought post boxes to Ireland.

As we were leaving this morning to go to the library, we ran into the postman, who had some thread for me. Yay! 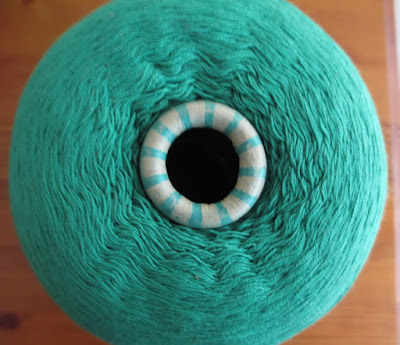 Bill found it listed on ebay a couple of weeks ago and asked me what I thought. It was a good deal so he bid and was the only one. It is DMC--pretty sure it's Cebelia, which is a nice, high quality cotton thread. When I was teaching needle tatting classes at a yarn shop, this is what we would provide for them to work with. It is great for both tatting and crocheting. This is a 21 ounce cone, so there is a whole lot of yardage here. I can stop looking for green thread now! I got a couple of balls of forest green a month or so ago in Buncrana and now I have this green. when it rains it pours! Last year I looked online and could not find any of the kind of green I wanted. Guess it wasn't the right time.

Time to make some lunch and then make a decision on what to read next.