Bring on the Fuzzy Stuff!

Today is the start of meteorological autumn, when, according to Irish Weather Online, the sun is as strong as it was in mid-April. Even though it has not yet been cold or even very cool, things feel different to me. The temperature is not unlike what we had at various times through the summer, but I am reacting to things much differently now. I am clearly coming out of the summer SAD season--I am very grateful that it is over for now! I am sleeping better and I think the raccoon look I have been sporting for the past several months is starting to fade a bit as a result. The bags under my eyes do not seem quite as dark or numerous. I have not had a non-functioning day in a while now and I no longer need my daily allergy pills. My depression is starting to lift. I have more energy and enthusiasm for things. I no longer wake up counting the hours until I can go back to bed and trying to rev myself up to slog through those hours. Ever since this stuff started with me a dozen years ago I have assumed it was due primarily to heat. After spending 9 years in interior Alaska, we moved to a place that is classified as high desert and which did not agree with me in any way. I did not like the climate, the landscape, the weather, or the blinding sunlight that was a feature of the town. Bill used to joke that he could tell when spring had arrived because the windows would be covered with as many layers of stuff as I could manage in an attempt to block out that nasty sun. It was there that I had my first allergic reactions and my first experience becoming ill in the sunshine and heat. I'd connected it to summer and, I suppose, because I found the heat so oppressive and uncomfortable, I connected everything to that aspect of summer.

Then we moved here and while my tolerance level for heat has gone way down already--65 feels hot to me now--it does not get nearly as hot as it did in any place we lived in the Lower 48. This year was the third summer we spent in Ireland and it may have flirted with 80 one day. Other than that it has been in the 50s, 60s and low 70s. And yet, the summer SAD this year was the worst it has been in a long time. Clearly it is not the only heat.

The thing is, because I felt so bad over the summer, I have really noticed the improvement this year too, in ways I have not in summers past. I could feel the depression start to lift last week. I paid attention when I woke up one morning thinking that I'd slept pretty well. I was aware of the fact that I have not had to spend any days in bed trying to avoid the light and feeling like crap for a few weeks now. I think that the heat itself is a side issue--it makes me uncomfortable and more grumpy. It definitely lowers my mood. The allergies are also annoying, but I can cope with them. I think the big issue for me is the sun--the quality of the light and the angle of the sun and stuff like that. Of course this all ties in together--the longer hours of darkness means that there is less time for things to heat up during the day and the natural seasonal cycle means that the pollen season ends. Fungal spores are a bigger issue for me though and I have felt better lately in spite of the fact that these are high right now, so that isn't the whole story either.

Whatever the reasons, I am so glad to be feeling good again. I am also really glad that it is time to get back into the fuzzy stuff! I did a lot with cotton and linen, sock yarn and thread this summer. I used metal hooks and needles because those were the tools that work best with those materials. I made smaller or modular projects that would not be sitting on my lap. But now it is time to switch. I can use my beautiful handmade wooden hooks again. 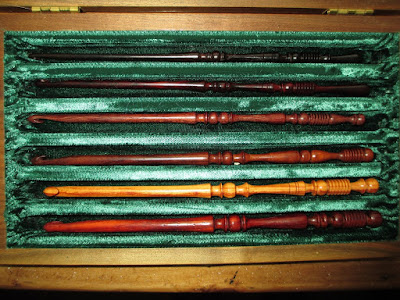 I can use them with my woolly yarn--the wood hooks and the wool yarn feel fabulous running through my fingers! I have looked at some stuff from my stash every day as I have walked in and out of my studio/study and it would set my mind drifting over possibilities for what I might make with it someday when summer was over, which it now is. Yay! 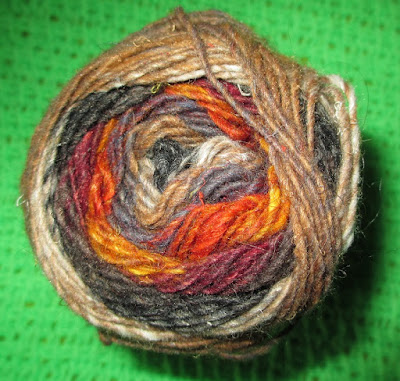 This is a skein of Noro Silk Garden--a blend of silk, wool, mohair, and a man made fiber.  It will become an autumn hat. No surprise there! I've had it for about a year, ever since Bill ordered it, along with some others, for me during a half price sale. I was pretty sure it would end up being a hat, but have gone back and forth about whether to knit or crochet it and what stitch I should use and all of that. I think I know now. I might start it tonight.

I also have this beautiful cone of green chenille, which measures 6 1/2 inches across--quite enough for a nice, big, cushy project! A friend brought it back for me from a thrift store in Boston--glad she found room in her luggage! 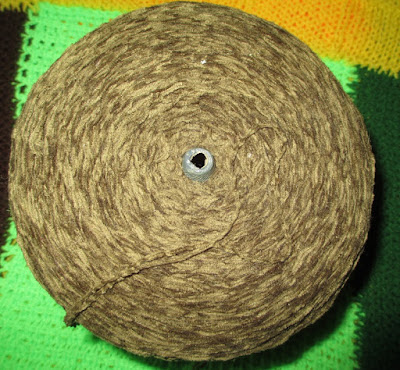 I have seen this as a big, comforting poncho kind of thing. I can see myself snuggled under it in the chilly days of winter. I am going to do some test crocheting to see whether my idea for it will work or whether I have to think again.

I am zipping along on my sock wool and mohair socks too. I am an inch or so away from the toe decreases, so sock one should be completed very soon. 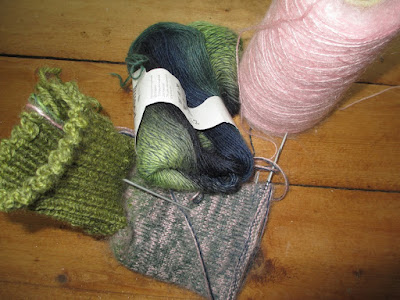 I am using size 1 knitting needles with the two strands held together so it is a tight knit which results in a lovely, cushy, fuzzy fabric. It is a bit tiring on my hands though, especially when I am doing a lot of k2tog. It will be good to have a project to alternate with this one so that I do not end up in pain from the repetition of movement.

I am thrilled to be past the summer and closer to my best time of year. It goes by so quickly, so I am trying to pay attention and consciously appreciate each day as it unfolds.

Dear Shari,
It's September 1 and I am about as tickled as I can be! Finally we are back in the "-ber" months. It feels different to me as well even though I had to get up in the middle of the night and turn on the air conditioner (it was SO HOT). I agree with you 100% that while the temperature (and humidity) are a big part of the problem, for me it is all about the relentless sunlight! I can't escape it. August is always so challenging because I can make it through until late July just from sheer force of will (and knowing there is more to come) but once we hit August, I just lose the ability to cope as well.
At any rate, it is only good things to come for months ahead now!
Best,
Dana

YES! Sorry to hear that it it still hot there--hopefully very soon the AC can be rested for many months to come. Hope you have a great weekend.