Mindless projects--I like to always have one going, especially this summer. I like having something I can pick up, make a few stitches on, and then put down in a spare few minutes or when, as is happening this summer, I am frequently either non-functioning or functioning at a very low level. It seems like I am spending an awful lot of time in bed either clogged, clogged with pain and pressure, very tired, or sitting here having difficulty keeping my eyes open. Sometimes all I can do is get under the covers and try to block the light, but at other times I can make myself do something, if even for a few minutes at a time, as long as it does not require focus or counting or anything.

A couple of months ago I was trying to decide on a big project that would be mindless and light enough to work on even if it is warm and humid. Last night I wove in my last ends. 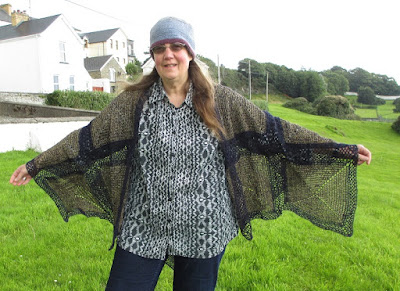 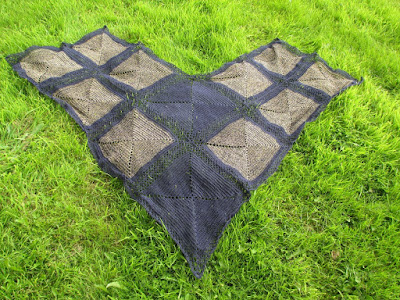 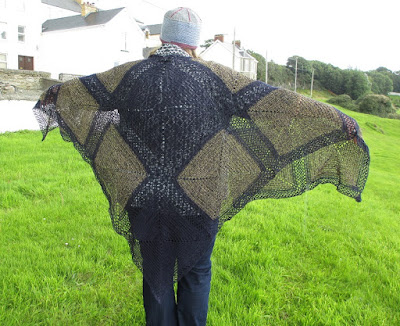 A couple of months ago I was trying to decide on a big project that would be mindless and light enough to work on even if it is warm and humid. I decided to do something with squares, so I looked through my stitch dictionary and my motif dictionary, but in the end just decided on simple dc squares worked from the centre out. I had no idea how big I was going to make the squares, how I would join them, or what this was actually going to be when it was finished. I was going back and forth between a T-shirt kind of top, a jacket type garment, and a shawl. I figure with either buttons or a brooch, this will work as a sort of drapey jacket as well as a shawl.

I had a huge cone of thin linen thread that Bill bought several months ago from an ebay seller. When he told me he'd bought it, he said it was a cone, but I was shocked when I saw how big the cone was. I knew I wanted to use that for this project, perhaps doubled so I could use a larger hook. I wound some thread into balls as I was reading an e-book. I still have some of those left, plus a whole lot on the cone--there is enough here for another big project. 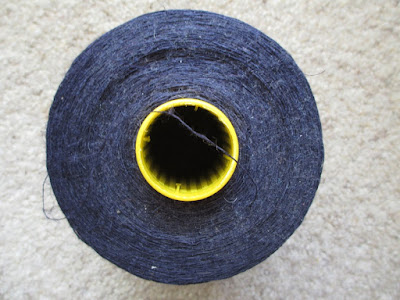 Then I remembered the 20 balls of gold metallic thread he'd gotten me, also from ebay, back when we still lived in Ballinrobe. I thought that would work out really well with the navy blue linen thread. So it did! I still have 9 balls of the gold thread left and several scrap ends that I will use for cross stitch or embellishment or something--don't want to waste it! 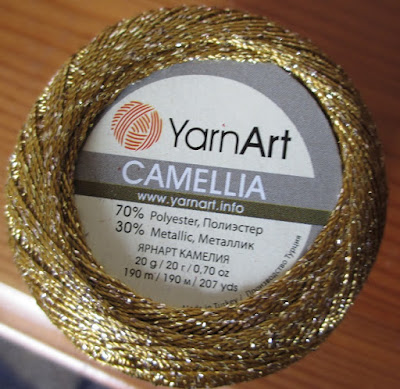 I started by using a strand of the metallic with two strands of linen and a G hook. This made a very lightweight, drapey fabric that I liked. I worked until I knew I would not be able to do another round with the amount of metallic I had left on the ball. Turned out to be 13 rounds. Then I dropped the gold and added another strand of blue and did another two rounds. I had thought about alternating the plain blue squares with the blue and gold, so made a couple of solid blues, but decided to stop there with those.

I'd done 4 or 5 squares when I decided I wanted the lace border around them and that I would join as I went, so I finished the square I was working on, went back and added the lace to the previously done squares and started joining them.

With those squares joined, I had to decide how to proceed, so I grabbed a piece of scrap paper and drew out a few configurations. Given the size (each square is 13 1/2 inches across), I decided on the configuration above so that it would not be too big. I had considered a wider border, but when all the squares were joined, I really did not need it, so I just did double crochets all around and left it at that.

I am very pleased with the result--especially since I was making it up every step of the way :-) Now I have to decide on my next mindless, possibly improv project. I have a second sock that has been languishing on the needles, but I am at a point where I need to be able to decrease gusset stitches on needles 1 and 3 every other round, while at the same time remembering where I am on the 12 round lace pattern on needle 2. In my unfortunate foggy-headed, very tired state, that is beyond my abilities right now. I live in hope, though. I stopped taking my allergy pill yesterday in favour of an herbal remedy that I got at the pharmacy. For these last couple of days I have felt better than I have in months. I do not know whether this will last. I am particularly curious to see what happens tomorrow, since we took a good walk today out among the weed pollen and fungal spores. Time will tell.

It was hard to find a good space in the apartment to photograph the shawl, so I brought it down to The Green--you can see the blades of grass poking up through the stitches. Just as I laid it on the grass and took out my camera, the rain started falling. We quickly snapped the pics and then decided that we'd keep on going and take our shore walk. It started coming down heavier then. 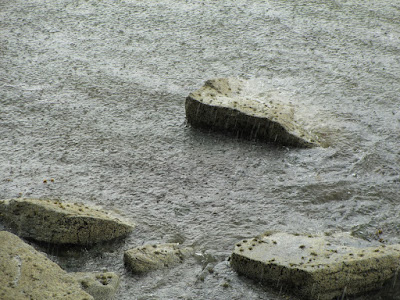 We kept going anyway and it kept raining for a while. Then it stopped. With the breeze blowing, we dried off fairly quickly. We probably walked a little over 3 miles today--and it was a great day for it!

On the way home we passed the wee free library and of course we stopped to have a peek at what was there. There was another old book in there by someone called Sheila Kaye-Smith to go with the one in back that has been there for a couple of weeks. I had never heard of her, but flipping through one of the books helped me to decide that it would be a good idea to bring them home. If I did not like them, I could always bring them back in a day or two. 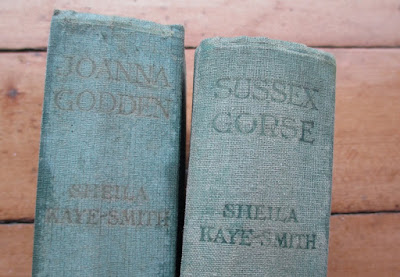 Turns out that Joanna Godden is the book she is most well known for and it was turned into a movie in 1947. She lived from 1887-1956 and wrote about Sussex and Kent--novels about English village life. I love that kind of thing! I read that she was a precursor to Barbara Pym, whose novels I love. Glad I picked these up!

Today was also library pick-up day--both Bill and I had requests come in--here are mine: 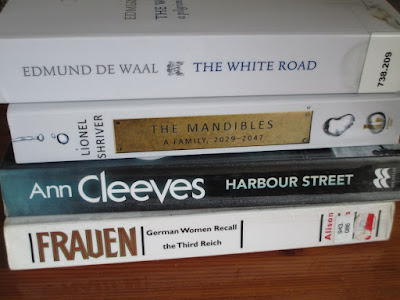 Such a nice day it has been! A new shawl, a lovely walk in the rain, a clearing head, and a tall pile of books--life is good!