Maeve Brennan and Other Book Stuff

A couple of weeks ago I clicked on a piece about Irish writers. Or maybe I heard a podcast. I read and listen to so many book-related stories that I sometimes forget where I heard what. In any case, I was introduced to Maeve Brennan. I googled her to find out more--here is a brief synopsis.

Maeve was born in Ireland (1917) but lived most of her life in NY City. Her father was a participant in the 1916 Easter Rising and was going to be executed until his sentence was commuted. In the early 1930s he ended up being named the first US ambassador from the new free state of Ireland so off the family went. Maeve wrote for various publications and was eventually head hunted by The New Yorker Magazine. Things went well for a time,but she married one of the editors and that did not go well. They divorced. She struggled with alcoholism and mental illness. She lived for a time in a room at the New Yorker offices. Her work was largely forgotten and she went from one transient hotel to another until she was admitted to a care home, where she died in 1993.

In the piece I read or heard, she was discussed as a forgotten Irish writer and that it was a shame more people did not know about her work. My next stop was the library website, where I found two of her works. I requested them both and they arrived last Friday.

The Springs of Affection is a short story collection that has groups of related stories. 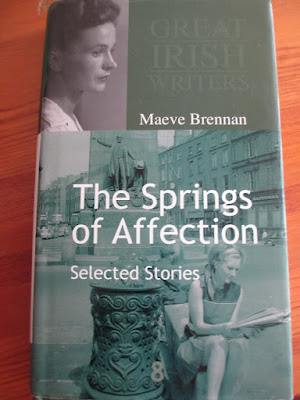 All of the stories deal with domestic life and all take place primarily in Dublin,though the last story brings us to Wexford. It was interesting that the houses themselves became almost characters in the stories--her descriptions of them and what was in them seemed especially poignant when you know that she ended up without a home. You could sense the importance of class, appearances, and possessions to people--some of it seemed quite contemporary.

In the second and third groups of stories we see episodes in the lives of families in which the members are distant from one another and often puzzled about how this came to be. She would tell one story from the point of view of the wife and in the next we see things from the husband's viewpoint. This was usually painful because it so clearly highlighted the ways in which these people completely misunderstood the other person. Both were acting--or not--on assumptions they were making about what the other was feeling and thinking. These assumptions were always wrong and often led to lifetimes of dissatisfaction and unhappiness.

In an introduction, her editor called Brennan a "traveler in residence," a phrase I quite liked.

In The Visitor, a novella that was undiscovered until after her death, Brennan writes that "home is a state of mind," a sentiment I could certainly relate to. The Visitor was apparently the first thing she ever wrote and it was never submitted for publication--a fact which mystified her editor. The story is again domestic and revolves around a young woman who returns to Dublin after the death of her mother in Paris. She arrives at her paternal grandmother's home. Grandma is holding a grudge and things do not go well. This book highlighted some features of Irish family life that brought to mind anthropologist Nancy Scheper-Hughes's book, Saints, Scholars, and Schizophrenics. This is an old book by now and I last read it over 20 years ago, I suppose, but I think of it every so often when I observe something here. This time when it came to mind I went back to the library website, where I learned there are two copies in the system, both checked in, so I placed my request. I am looking forward to re-reading it now that I have been here for a couple of years. My search also led to the discovery of a new study called--appropriately enough--Saints, Scholars, and Schizophrenics Revisited. That should be on the way as well. I can remember when I worked in a public library almost 9 years ago and people could get pretty hostile about the fact that there was no physical card catalogue anymore and that everything was done online. I must say that I never could understand that hostility. I LOVE being able to go to the website, search for a book, and request it whenever a bookish thought pops into my head!

I am also a happy woman when unexpected book finds are a feature of my day. Today was such a day! We were going to the shop to pick up some butter and onions and we had to walk past one of the three charity shops on Main Street. The door was open so we walked through it. I headed directly to the book corner where I saw the sign that read 4 books for 1 euro. When I picked up the first book to look at it, I heard Bill's voice coming from somewhere behind me. He was engaging in crazy talk, "Shari. Shari, what are you doing? Shari, we don't need any more books." "Are you saying something?" I asked. By then he had stopped talking and was looking through the books himself, commenting on how good this one and that one sounded. I pointed out that they were 4 for a euro and that there was no point in stopping before we had a multiple of 4. So, yeah, we do not NEED more books. But we got some anyway. 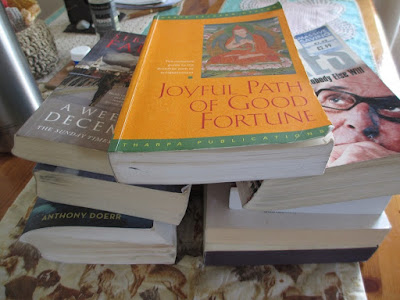 Yes! And plenty of it! Yay!