Creating Through It All

Years ago I had a job as the archivist at the Alaska Native Language Center at University of Alaska Fairbanks. I had a small office full of various audio equipment--cassette players, reel-to-reel, a couple of computers, an audio filter, and maybe more that I have forgotten about. My job entailed digitizing the extensive collection of Alaska Native language recordings to ensure that they would still be available in future, since the tapes were mostly old and in various stages of deterioration. There are many Alaska Native languages and I was only studying one--Inupiaq Eskimo--so while I would often listen to those tapes as they were playing, for other language recordings all I had to do was make sure the tape was playing and the sound levels were good going into the computer. Then I could just let it go on its own and do something else, go get coffee, or whatever. This was a job I had been asked to apply for and at the time of my "interview" I was told I could do whatever I wanted as the tapes ran. Once I set things up in such a way that I had two hours until the tapes were done, so I went out for ice cream with a friend. Mostly though, I either read or stitched. As it happened, my time in that job coincided with a departmental move from a building on one side of the central campus to one on the other side. Everyone else was becoming increasingly agitated as the chaos of moving became more intrusive on people's work life. Since someone else was in charge of packing the contents of my office, I did not have to think about any of it. As everyone ran around like their hair was on fire, I was simply there with my tapes and my yarn. The tapes played and I crocheted. At one point, the department head looked at me and said, "Shari is our rock. She just stays calm." I laughed and told him whenever they were ready, someone could push me across campus in my rolling chair and I would just keep on crocheting.

That was not the first or the last time I have been grateful for my textile passion. I can always have a project to do that fits whatever situation I am in. If I need distraction I can pick up a project that requires attention and get lost in it. If I am stressed or even sick, I can pick up a mindless project and stitch away, either taking my mind off how lousy I feel or calming my agitated mind. If I am depressed I can make something quick and feel like I accomplished something. Needless to say, I have found much comfort in my creative activities over the last couple of months which were dominated by packing, moving, getting things sorted here, and by the arrival of y annual spring/summer depression. Last year the move to Killybegs alleviated that somewhat, but this move has exacerbated it and I am still working on making it more manageable. Creating helps with that.

Before I knew we were going to move and while I was still being foster mum to Little Man Fergus, I had decided to use a giant cone of cotton chenille that I had found at the charity shop for 5 euro. I figured it would worm if I knitted it, so I tried crocheting with it, but wasn't happy with that. I opted for Tunisian crochet and that was the right choice. With it being cotton it is a little heavy and since it was tricky to work with I dd not want anything fussy, so I decided on a large rectangle that could be a wrap or a blanket--I have used it as both since I finished it. 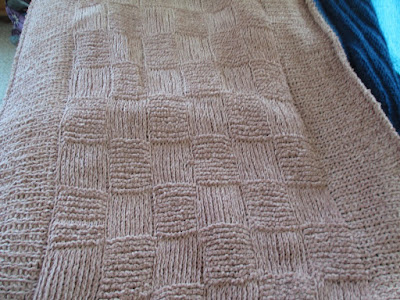 I did a checkerboard pattern with Tunisian reverse and knit stitches for the centre panel and then did alternating knit and reverse on the sides. Here is a close-up of the checkerboard section: This was my downstairs project and I picked it up and worked on it as the mood struck. When I was finished with this I still had some chenille on the cone and by this time I knew we were moving, so I made a shower mat for our new place. I STILL had some chenille left so I made some washcloths and a cowl.

Upstairs I was making socks. I'd had this pair on the needles sine around Christmas and I finally finished the second sock. 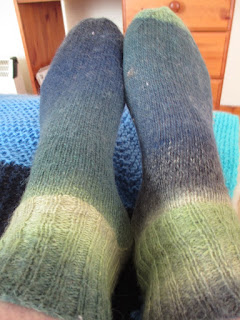 They are plain vanilla socks on 68 stitches and a 2x2 cuff. Once these were done I cast on for another pair and got sock one done. Sock two was on the needles when we moved and got placed in the drawer of my bedside locker to be worked on at night whilst listening to the radio or podcasts. 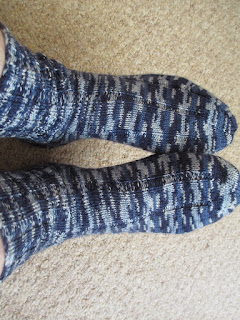 These were done on 68 stitches with a 2x2 cuff and a 7x2 rib on the top of the foot. Both pair have star toes.

My first new project when we got here was to make a couple of cushions for the wooden dining chairs. 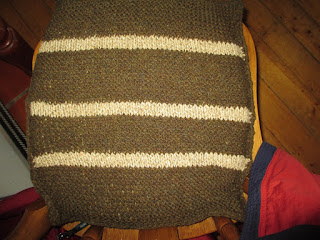 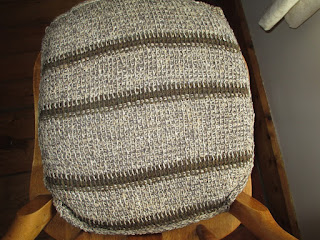 The top was knitted and the bottom done in Tunisian crochet. The yarn and the foam cushions were charity shop finds--the wool in Killybegs and the foam in Donegal Town.

As usual I have a couple of projects going and many more ideas in my head. I cannot imagine what would be going on in there if I did not have these ideas, but I am grateful I do not have to find out!

Such a lovely post and profound, too. The power of creativity.

Thanks, Laurie. So many ways to be creative, whether it is making something tangible or making a life.