We have moved several times during the three and a half decades of our marriage. Until the past couple of years almost all of these moves were big--a couple thousand miles or more. Just a couple were from one town to the neighbouring one. The last big move would have been our jaunt across the pond when we came to Ireland from Maine. We did a year in Ballinrobe, Co Mayo. Then we moved to Killybegs, Co Donegal. This was not a big move, but was more than a few kilometers and we moved by bus, making trips back and forth for a month. Almost 6 weeks ago (already?!) we moved from Killybegs to Moville, also in Donegal, but at the opposite end--and Donegal is a pretty big county by Irish standards! We had done the trip by bus for a visit and that took 3 hours, so we figured that since we had friends bringing us and our stuff, it would probably be a simple 2 hour ride. It even seemed like the move itself might be almost pleasant--good company, 2 hours of beautiful scenery outside--what's not to like? Ha!

Turns out that we had a lot more stuff going out of Killybegs than we had going in--and much of it was bulky stuff like blankets, pillows, yarn, fabric, and books. Much of this stuff was passed on to us from others while some was from the charity shop. All of it was either stuff we needed (pillows, blankets, sweaters I had made since I left almost all my winter clothes behind in Maine) or things I was not willing to give up (books, yarn, and fabric). We were grateful for the help! The plan was that one friend (OG) would be driving another friend's larger vehicle since he has a small Skoda. Most of our stuff, along with Bill and myself, would be in that vehicle with him. Another friend (JOB) would ride in his smaller vehicle with his brother. Last minute stuff would ride with them. We would be in Moville at 2, where we would sign the lease, get the keys, and unload.

When it was time to go, JOB said he and his brother had to make a stop and would meet us there. Off they went. OG followed a few minutes later. We did not make it far when the noise started. It was a nasty scraping sort of noise. The vehicle had, just the previous week, come out of the mechanic's shop after having two springs replaced. This mechanic was just off the main road so OG turned off and pulled into his lot. The guy came out and said there was too much stuff in the vehicle and, because the previous owner had put on "cool" oversized tires, the plastic on the wheel wells (or whatever it is called) was scraping the tires. He offered a trailer, but there was no trailer hitch or tow bar on the vehicle, so there was nothing else to do but go back to the Old Coast Guard Station, wincing at that scraping noise as we rode over every bump--and since we were going on back roads, there were many bumps. Once we got there, OG pushed down one of the back seats in his little Skoda and we started piling stuff in there. We fit almost all of it in too, only leaving a few blankets, some plants, a large, but light, box, and the two big heavy suitcases. We left again and drove through rain, drizzle, a hailstorm, and mist for one hour and forty minutes, driving into Moville under a sunny blue sky. As they like to say, you can have all 4 seasons in one day here. 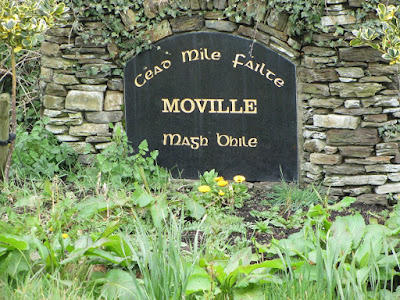 We had time so we stopped at a cafe and had some soup before we headed across Market Square to the letting agent's office, bumping into JOB on the way. We told him we'd come up in OG's car and he said, "I thought that was his yoke!" A yoke is a thing here. I also learned that day that a "gaff" must be a home or a dwelling because JOB used it a couple of times, starting when he gave us a jade plant he had rooted and grown himself--he said it was for our "new gaff." Anyway, it did not take very long for everything to be unloaded and then everyone went their separate ways and Bill and I were alone in our new place. I turned on the fridge and we went to get a little food--milk, bread, etc. We got back and the fridge was not working.  I tried the kettle and it did not work. None of the outlets worked. Too late to call the letting agent's office and there seemed to be no issue when we looked at the circuit breakers. It was cool enough that we could put the milk outside on the window ledge (there are protective bars outside, probably to stop a child from falling out of the window, but in this case it kept the milk from falling!). It was cold that night but we had no heat or hot water. I tried to sleep but could not, so finally I got up, put on my coat, a cowl, a hat and some gloves, took an afghan and went to sit on the loveseat, where I cried until 4 am when I finally dozed off.

Next morning we went to the letting agent's office as soon as they opened and told them about the problems. Then we went and got coffee!! They told Michael, who takes care of stuff for them. He showed up that afternoon and was puzzled. He called electricians. They were coming from Letterkenny but it would take a couple of hours. We went and got some food for supper and spent a few minutes sitting by the water, just to feel the peace.

The electricians came and determined that the fridge was tripping the circuit for some reason. This was a small, under-counter fridge and it did not even have a little freezer compartment! Seemed odd to think that that little thing was tripping the circuit! Michael said he would bring us a new fridge in the morning and left it unplugged, so we had no fridge but we had outlets, hot water, and heat!

The next morning he showed up with some guys who took the old fridge away. He told me he could not find a new one that was the right size so he was bringing up one from downstairs (there is an office down there) but it had "a little frost" in the freezer compartment. I said I would defrost it before plugging it in. They all left and I heated water to put inside to speed things up. I opened the freezer compartment and saw that "a little frost" was actually enough to almost completely fill the space! There was just enough room on one side for me to stick a shallow container of hot water in there. It took all day to defrost it.

In the meantime, OG and a couple of other friends showed up with the rest of our stuff, so I was carrying stuff up, making coffee, chatting, and defrosting the freezer. We ended up getting a sandwich from the takeaway that night. I was so tired. And I held my breath when the freezer was finally defrosted and I plugged in the fridge! Thankfully it did not trip the circuit and we could bring the milk in from the window ledge! I was not sorry when that day ended!

Sounds like you had quite a time! But all's well that ends well?

Hasn't ended yet! We finally got our address changed at the bank--we found out this morning that they did it on the second try. We await the change with the electric company who has read our meter here, but still has our Killybegs address on the bill. And the big one--Eircon--is still to come. We had to just let our contract in Killybegs run out and pay for the month+ that we have not even been there in order to avoid even more fees for cancelling early. That expires at the end of this week so we both expect the rip off team to go to work. They are supposed to arrange for someone to pick up the modems and they keep charging people until they have it back. We have two because even though we asked them not to send another one to Killybegs, they did and we still had the one from Ballinrobe. So until they have the modems and we get refunded, they will still be in our lives! They will take an entire month's fees from our account when there will only be 6 days between the beginning of the new billing cycle and the end of the contract, so they will owe us some €€€€!!!