During our 35 years of married life, Bill and I have always made plans. We learned early to hold those plans lightly and to expect them to change. I don't think we have ever had a plan come together in exactly the way we planned it, but having a goal and an idea about how to get there provides us with a framework. The fact that we know to be flexible and to seize unexpected opportunities helps us reach the goals we set. Sometimes people ask me how we are going to do something. I always answer with our current idea and then say, "But weird stuff happens."

Weird stuff has happened over the past couple of weeks. The result of this weird stuff is that we now have two homes for the next few weeks while we take trips with our stuff to Killybegs and without our stuff back to Ballinrobe. We went to Killybegs last week to look at a terraced cottage that we had seen listed before and liked. We were in the middle of the Ballinrobe lease and could not pursue it, so someone else rented it. It came back up a few weeks ago but Bill was in no fit state to travel. We watched and waited and as soon as he felt like he could manage I called the letting agent and arranged to meet him the next day to look at the place. We said we wanted to rent it, gave him a security deposit and he contacted the owner, who agreed to rent to us. We came back to Ballinrobe last Friday then went back to Killybegs with some stuff on Thursday. We signed the lease got the keys and spent the night in our new place. We came back to Ballinrobe yesterday, leaving Killybegs on the 8 am bus.

We were both exhausted, but I snapped a few pics. I meant to take a photo of the building itself, which is a 150 year old Coast Guard Station made of stone, but as we were making our way to the bus stop yesterday morning I did not think of it and on Thursday we were busy and tired and I figured I'd do it in the morning.

I did get a few pics of some of the little things I like so much about our cottage, though I can't capture the good vibe in a photo.

For some reason, I am quite taken with these doors. 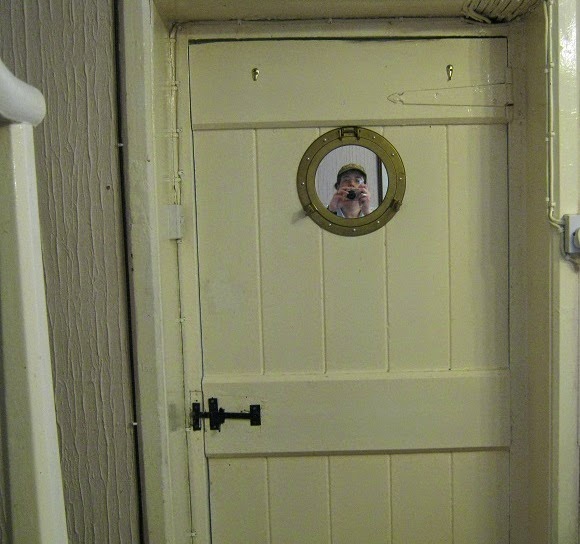 This is the door from the sitting room to the outside. There is a small enclosed entry area on the other side of the door and we turn right and go through another door to get outside. It's a good design and reminds me of the arctic entries most house in Alaska have--keeping the elements a bit removed. I find the "porthole" mirror to be a cute touch!

The kitchen door has a row of hooks along the middle--again this is a good idea because the place is very small so good to utilize the space. 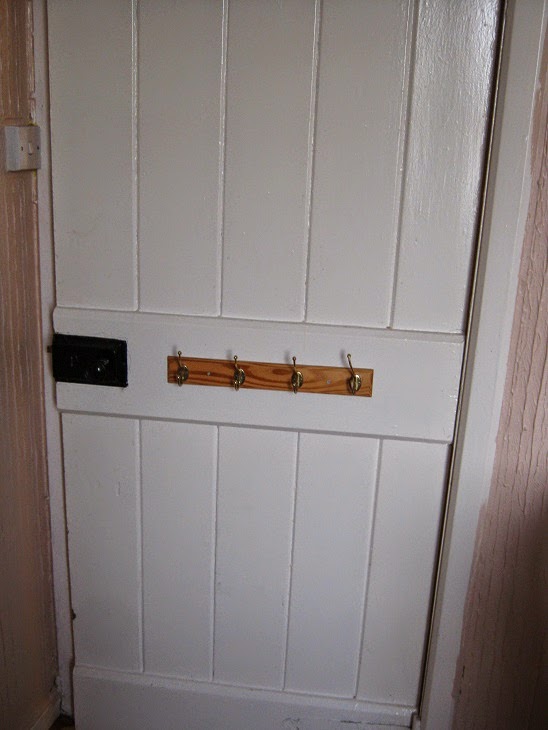 Speaking of the kitchen, after we looked at the place last week I was starting to think about how I was going to grocery shop/cook without a freezer. There was an under-counter fridge with a tiny freezer compartment. We got a happy surprise when we found out that the owner, who spent a couple of days there this week cleaning and sprucing up the place, decided that this was inadequate and bought a new stand alone freezer. I think that may be bigger than the fridge! It does crowd things a little, but we might be able to move it a bit. I thought placing the magnets on there was a thoughtful touch! 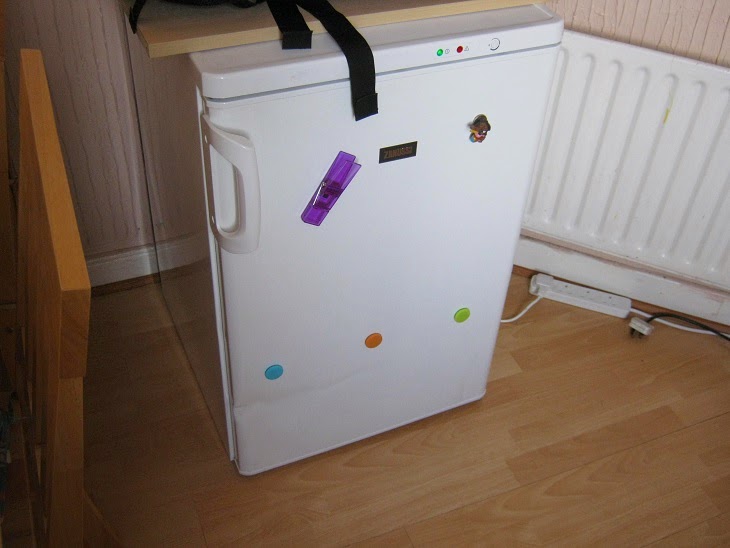 He also bought a new frying pan to add to the ones there and some wine glasses. He really did a great job of making everything quite homey for us.

This is the view from the kitchen window: 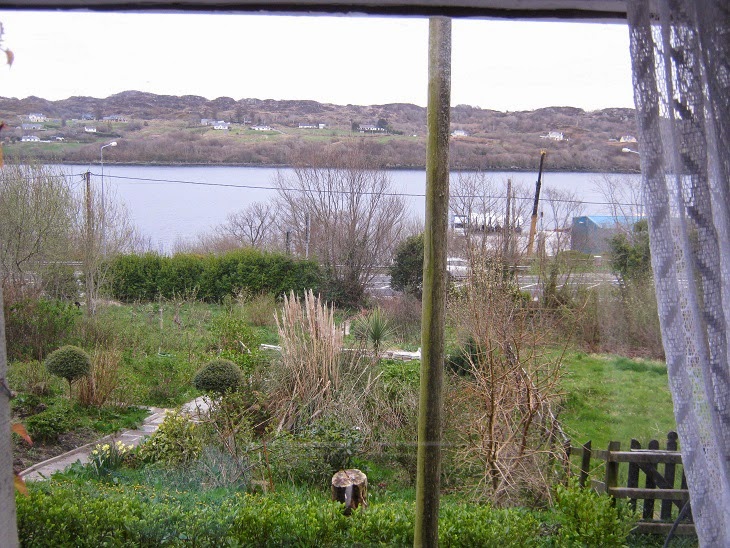 We met a couple of our neighbors who do the gardening there and they are hard at work on flowers beds and the garden (yard) you see there. When the letting agent called us to say we got the place, he said that the owner asked that we not dig stuff up. We can feel free to use the garden to sit in and stuff. He asked if that was OK. It is more than OK! We have been really lucky in our last few places to have neighbors who love to plant flowers. I enjoy having plants in pots, but do not enjoy yard work in the least, so to be able to enjoy the flowers and plants while someone else does the work is quite fine with me!

When we got the lease in an email the other day I read it over and was puzzled by a line about keeping the sofa covered. I did not pay much attention to the furniture and could not remember sofa details. When we got back it was one of the first things I looked at and all became clear! 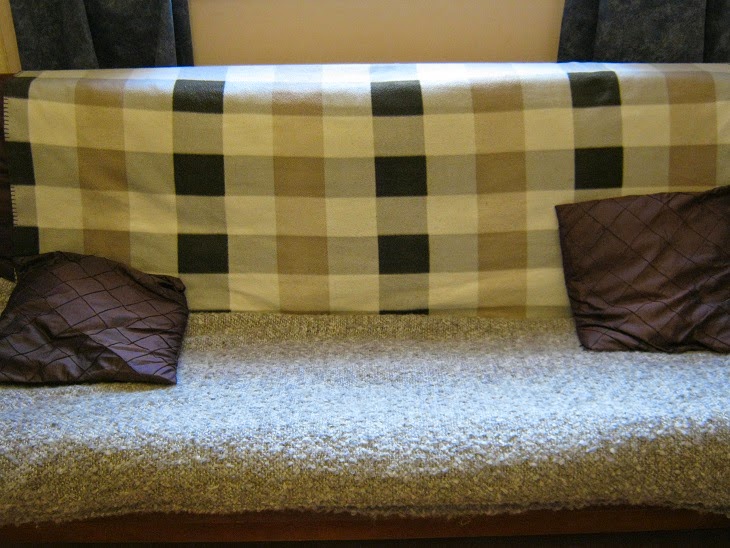 It is a futon couch which opens into a bed. He doesn't want the futon cover to get ruined. That is fine with me. The blanket on the bottom is actually a pretty decent woven mohair/wool thing which will be great in winter. For the summer I will just find a nice sheet at the charity shop and use that--it'll be cooler.

This is the rest of the sitting room: 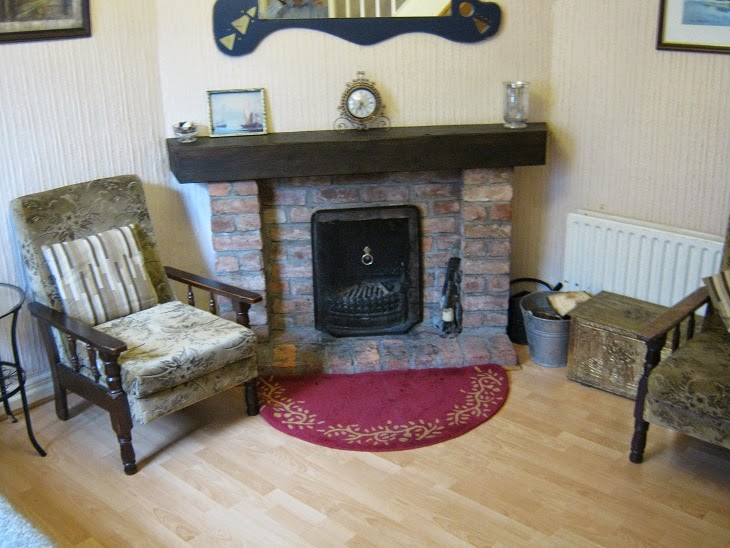 In addition to the doors, I love the texture of the walls. 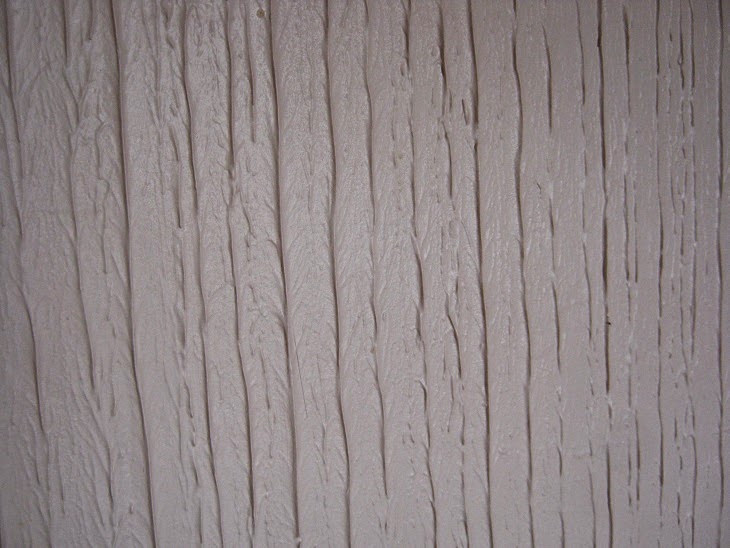 They are like that throughout. Upstairs the floors are beautiful wood. Bill took a photo but hasn't processed it yet.

The bedrooms and bathroom are really tiny. The whole place is quite small, which is great. I really love it and am glad that it stayed available long enough for Bill to get well enough to make the trip! I love the cottage and I love the town--I did not want to leave yesterday morning!

We are back In Ballinrobe for a few days and will go back to Killybegs next week with some more stuff. We have moved in a lot of different ways over the years--moving van, U-Haul, USPS, plane, and now bus! It's very handy that we don't have much stuff and that places come furnished!