We've been asked to avoid contact with people as much as possible to try to delay the spread of the COVID-19 virus so as not to overwhelm the medical system. We're hunkering down and complying. I know that this will be a real hardship for many people for various reasons, but as a friend said in an email yesterday, it's business as usual for this introvert. I don't socialise much anyway. And having just hauled what seemed like a tonne of books, yarn, thread, and other stitching supplies and tools, it seemed like I would have no trouble occupying my time as we engage in social distancing. However, I did manage to top up the supplies before things started to shut down (including the library) and we were asked to stay home as much as possible.

We walk right by one of the charity shops on our way to the library and we've called in a few times. The first time, I thought to myself that it was good that I'd built up a stash of orphan yarn from charity shops and from former owners who didn't want it anymore, because it didn't seem like I would be finding it at this shop. In subsequent visits, I've happily learned how wrong I was!

A few weeks ago, we went in and I spotted this plastic container stuffed with mostly full spools of variegated machine embroidery thread, labels still on. 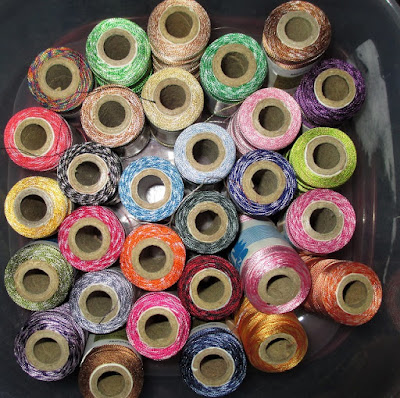 I don't do machine embroidery, as I work by hand, but I can use this for that, so I brought it to the counter and asked how much it was--as is so often the case, there was no price. I hate asking and every single time I have to, I can see that they hate it, too. They always seem a wee bit agitated and hesitant, as the woman did in this case. 'Three euro?' she asked tentatively. I smiled, nodded, and said I'd take it. When I got home, I counted 30 spools of thread, so I am very happy with this find.

The other day we popped in and I saw this pom-pom novelty yarn. 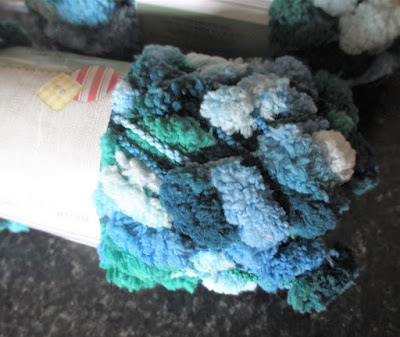 I like the colours in this, but I got yarn like this years ago in a mystery bag and did not like it at all. I tried crocheting with it and then knitting with it and was not impressed. But then I thought about weaving and figured it'd be worth getting to play with in that way. This yarn was marked (60 cents per skein and there were two), so I took them up to the counter. 'Do you knit or crochet?' the woman asked (not the same woman who sold me the thread). 'Both,' I replied. She smiled and walked over to a black bin bag that I'd been bending over in order to look at the books. She opened it to reveal bags of yarn inside--all packages of full skeins. The top bag was a yellow baby boucle, which I did not want. Under that was a bag of a different kind of deep reddish/brownish novelty yarn with a metallic thread. I would have considered a skein or maybe two of that, but didn't want a full bag. Then I found the buried treasure. 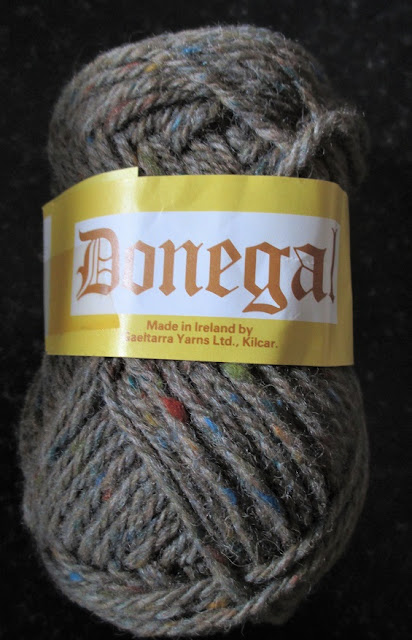 Bulky Donegal tweed (100% wool with flecks)--be still my heart! I eagerly tugged on the bag, looked at it and asked how much she wanted for the bag. She hesitated and looked uncomfortable. 'Five euro? Is that too much? she asked. 'Nope, that's grand,' I replied and put it on the counter with the pom pom yarn and a book Bill had found. She tossed in the pom-pom yarn for nothing. There are 20 skeins in the bag. And, when our daughter came, she brought several crochet and knitting magazines for me, so I have a few projects from those I am considering for this yarn.

As always, the charity shops are a great place to find books, some of which are happy surprises. The first time we called into the charity shop on our way to the library was just after we'd gotten our stuff here and I admit to feeling a little bit sheepish as I picked up a book of Alice Munro short stories while on my way to pick up more books at the library, knowing the books I'd moved were still in piles on the floor. I tell myself there are worse obsessions. The other day after the dentist, we had some time to kill before catching the bus home, so we called in at the library and chatted with the librarian there, not knowing it would be the last day the libraries would be open for a while. Then we went to a couple of charity shops, picking up a couple of books in each one. Bill got a novel by an author he likes, I got a novel by someone I've never heard of, and I found two surprises. One is a book about journeys around Ireland from history and folklore and the other is a book of social history about medieval women. Every time we walk out with books, Bill comments that we don't need any more books. And that is true--we don't need them. But we enjoy them, the money goes to good causes, and most of the ones we bring in are never intended to live with us forever. I keep a few, but most of what I buy gets put on the pile to be re-donated one way or another. When we moved, a friend brought three boxes of our books to an Oxfam shop. Sometimes we put them on an exchange shelf. There are books that bring to mind a particular person, so I give it to them when I'm done (if they want it). Or we give it to one of the charity shops. Our local one has fewer books than others, so we'll probably bring the current pile there at some point. And, as I joked to Bill the other day, while other people are panic buying toilet paper, we have our supply of books. They're there for us to spend quality time with and then, if the panic buying gets out of control, we can use them for --ahem--other purposes in a pinch. I saw a headline in an Irish paper today proclaiming that toilet paper manufacturers are struggling to keep up with demand. And then there's this possibility, send to me by a friend: 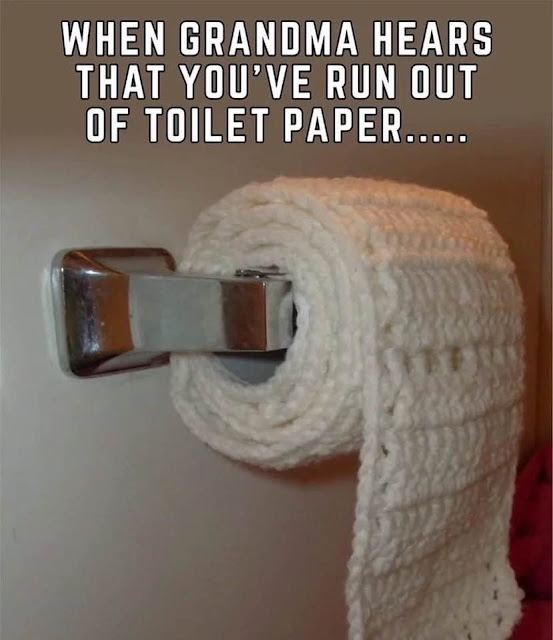 I love finding surprises at thrift stores and it's been way too long since I've been to one. The last photo is very funny!

I just love the last photograph … so funny :)

I adore thrift stores and I am always checking what books they have.
You made a great haul on that yarn.
I don't know never learned how.
Love the grandma idea to help out...so funny 💮

A friend emailed me the photo--made me laugh.