The panic buying has begin here. We went for a regular shop this morning. I had planned to get some porridge oats--whenever we start a bag, I make a mental note to pick up another one the next time I'm at the store so we won't run out. We recently opened a bag, so it was on my list. No luck. 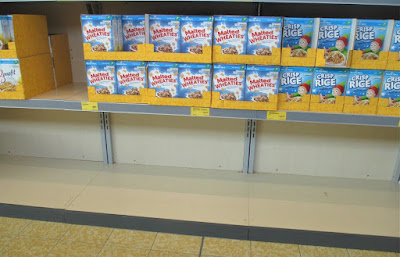 Bread wasn't on my list, which is just as well. 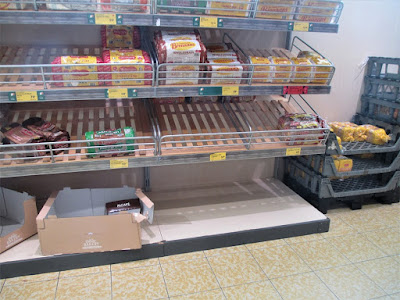 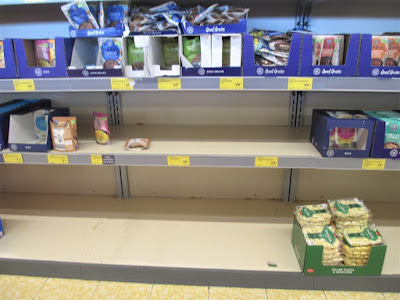 We were there in the morning, so I can only imagine what awaited anyone who decided to shop in the afternoon!

At the till, the woman seemed a bit frazzled. I asked her whether this had been going on for a while or if it just started yesterday when an Taoiseach announced the closures and other delay measures. She said there was some before yesterday, but then it really got crazy.

There were a lot of people in the store. Usually there are one or two tills open. Today there were at least 4. It was really something. Various government ministers have asked people not to engage in panic buying, because it makes things more difficult for others, but I think some people do not think through how their actions can cause problems for people who are more vulnerable. On the bright side, we heard on the radio this evening about various helping groups right across the country that are forming and coming up with clever ways to help people get what they need while minimising contact, as we're being asked to do.

There were a few things on my list that I could not get, but I'll manage without them.

It is so sad that this horrible virus is making such drastic changes in people's lives and also panic buying.

I agree! And the fear is understandable, but troubling, because it can so easily get out of control and make a bad situation so much worse.

I keep stocked up on most everything I need because I lived way out in the country for about 35 years and didn't want to run to town for just one or two things. And we have a fridge/freezer and an upright freezer and they are always stocked. Even so, if I was worried about something I'm pretty sure it would be food, not tp!

… and it seems panic buying is spreading! I have heard that some people have even gone out and bought larger freezers to keep more food in!

Here's hoping the electric grids continue to function for those freezers, Jan! I hope the people actually use the food they stockpile and it doesn't end up being wasted.

I know what you mean, Vicki--I try to keep basics in the kitchen and stuff in the freezer anyway, just because it makes things easier. If it's lashing down rain, I might not feel like walking to the shop, so having stuff available is handy.

I am hoping that this stops soon. It is harmful for people (elderly or disabled, for example) who cannot easily get to the shops, to finally get there and find empty shelves.