Our new town is in a Gaeltacht region, which means there is more Irish in use than in some other areas. 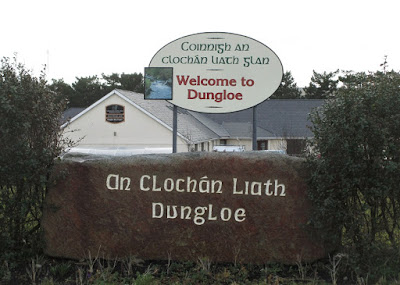 While it's common for other towns to have both the English and Irish versions of their names on the welcome signs, what is slightly different about this place is that the Irish name is the only official name of the town. People use 'Dungloe' (the g is usually silent when people pronounce this word, so it sounds like done-low) and some places spell it 'Dunglow' although I have been told that is incorrect. But this is not the official name, which is an Clochán Liath. In the past, these were two different places. The Irish name refers to the grey slab that offered the only way to cross the river until a bridge was built in 1762. Dungloe (Dún gCloiche in Irish) was a settlement 5 miles to the north where there was a monthly fair. The fair was moved to an Clochán Liath in the late 1700s and people started using both names.

There is usually a smattering of Irish around, no matter what town we've been in, but it is a lot more visible here, both on road signs and businesses.

I look forward to learning some Irish. Part of the problem I've had is that when I am studying a language, I am always better at reading and writing than I am speaking and listening. I can get some sense of what some words mean here, but wouldn't know how to pronounce them. Interestingly, place names have helped with some vowel combinations. For years before we came to Ireland, we had a map on the bedroom wall, which we also had up in our first apartment here. I would look at some place names and have no clue how I would pronounce the words. We listen to the radio a lot here, so hearing some place names regularly repeated, I would suddenly think, 'Oh, I bet that's this place they're talking about!' For example, I never knew how to pronounce Youghal or Dun Laoghaire until I heard these names on the radio and learned that they sound like 'yawl' and 'done-leery' respectively. Anyway, my interest in Irish is primarily reading, although it would be nice to be able to speak a bit as well. I will be enquiring about whether there is a group at the library or nearby, or a class or something. Whether there is or is not, I discovered two different sets of lessons on CDs with accompanying booklets at the library. I won't have time to begin this until mid-March, but I plan to check one out and start then. Should be fun and this seems like a really good place to build my skills.

How wonderful it must be to learn about this lovely new home for you and Bill.
From both you and your husband's photos on you blogs, I feel closer to Ireland than even in my books.
Thank you so much for sharing.

I think if I moved to Ireland, or even planned to visit, I'd want to learn to speak the language too.

Hi Jan--yes, we feel very lucky to be able to live here. It's a wonderful place :-)

I had the same thought before we came, Vicki--even though I knew that not many people speak Irish regularly, I thought it would be respectful to know at least a little bit. I worked on language preservation with Inupiaq Eskimo in the past and understand how important native languages can be to people. So I learned a little bit and on the first day we were in the country, said 'go raibh maith agat' (thank you) to someone, who then answered with a long string of Irish--LOL. I smiled and nodded, feeling foolish and having no clue what had just been said to me! So now it's just time (past time, probably!) to make a more systematic effort. :-)

I am enjoying your posts and finding out a little about where you live.