Learning Where Things Are

We set off this morning to find the recycling centre. This is where the bins are to recycle glass, which cannot be put in the recycling bags (or bins, if people have them) for pick-up. In other places we've lived, these bins for glass and tins was located in car parks of some kind, but here they are inside the recycle centre. This is also where we will bring food garbage, like used coffee grounds, apple cores, etc. Our apartment is upstairs on the first floor (it would be called the second floor in the US, but here the bottom floor is the ground floor and the one above it is the first floor). Anyway, we don't have anywhere to put garbage and recycling bins, so we buy bags to put out for pick-up. It is usual here for them to pick up garbage one week and recycling the next. We try to keep our garbage and recycling to a minimum for environmental reasons, but even if we wanted to put out garbage frequently, the most we could do it is every other week. This, along with the fact that we can't have bins, means we have to do something else with food garbage--we can't leave it inside for two weeks. We can bring it to the recycling centre and dispose of it there. It has to be in compostable bags, and we have plenty of those. When we run out, we can pick up more at Aldi. The recycling centre is about a mile away from our apartment and it's a really nice walk. Today we had some more fierce wind, which has been blowing for weeks now, a bit of freezing rain, occasional brightening, and plenty of grey skies. It was brisk, that's for sure, but I enjoyed the walk immensely! 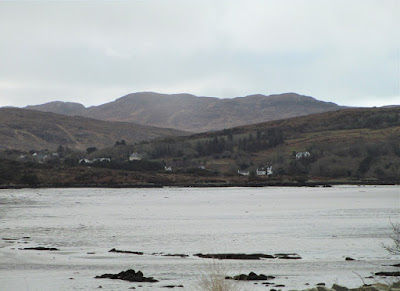 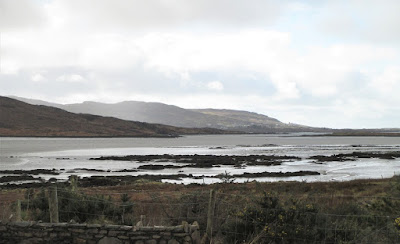 When we were almost home again, we saw this sign, which made me laugh. 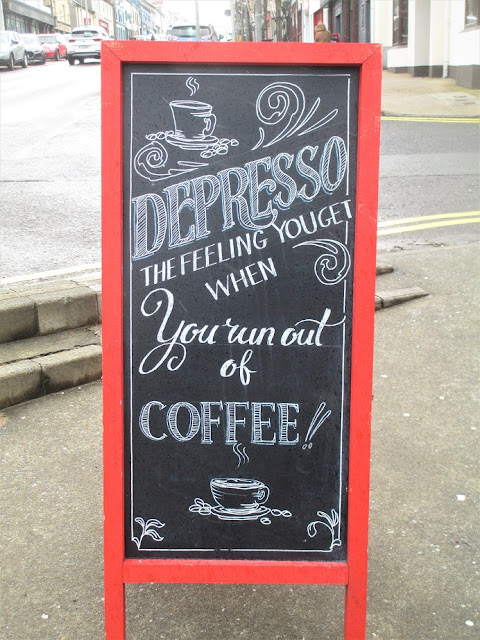 After lunch, we went out again, heading in the opposite direction this time, looking for the community garden, which is quite close by. We found it and saw that recent storms had done considerable damage to the polytunnels. However, there were new fruit trees planted, so maybe it will function anyway this year. We figured there wouldn't be much going on right now, but we were hoping for a sign with contact info on it so Bill could see whether it is still in operation and whether he'd be able to participate. He did get an email address, so there's another task successfully completed.

We decided to walk home via the shore walk, because one of the access points is just around the corner from our apartment. 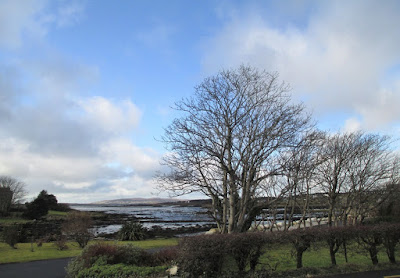 It looks like the area where the trees are is a wildflower garden. That should be nice when it is the season for flowers. 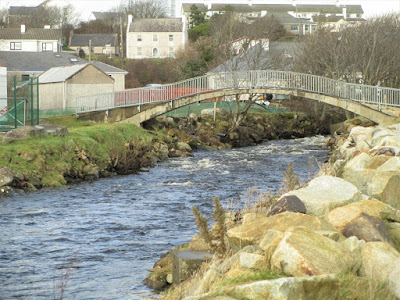 We didn't walk over the bridge this time, because this is just about the spot where we turn off the shore walk and make the two or three minute walk from there to our door.

It was nice to explore some new parts of our new town. In future, we'll just head out and go down various roads to see where they lead. There's also a river walk. We walked part of that one day to get to one of the grocery stores, but there's much more to it than what we saw. It's kind of weird--this is the smallest Irish town we've lived in, in terms of population size, and yet it seems like it has a lot to offer, at least for the way we live. There's the library, more grocery options, and a lot of footpaths (sidewalks), which makes walking a lot safer. It's good.

Happy settling in and happy exploring of your new area.
I did enjoy this post and seeing your photographs. That depresso sign was a fun one!

Glad you're exploring your town and sharing photos with us. It looks nice.

The city I live in gives everyone a big plastic trash can. We put it at the end of our driveway every Tues. & Fri. morning. The garbage truck has two long metal arms that pick the can up and empties it, then sits it back down on the ground. Before we moved here two men stood on the back of the truck and manually emptied it. Recycling is picked up every other Tuesday.

Thank you, everyone. We're glad to be exploring now instead of trying to get stuff done--now we can start to settle.

Vicki--most people have bins here, too. The bags are only for people who have nowhere to put the bins. In one place we lived, they made you buy the bins at 40 euro a pop. Instead of buying the one for recycling, we asked our neighbour if we could give him money each month and use his--he was a single guy, so had room. He was happy to do that, so that's what we did. In the place we just moved from, three cottages shared the bins. In each place the bins are emptied by people, although I've seen the mechanical ones years ago :-)

Wow it's good to see how everything is getting along. I'm glad you got the WIFI and Deposit situation sorted.. What a hassle. I hope things with the new landlord is much more stable and amenable. I hate it when things are left-hanging and I don't see how that sort of thing is any way to do business. I suppose they figure 'best to get on well with the new tenant' if one is incoming but it's always good not to burn bridges I always say.

This is fun with all the pictures and I liked your 'live duck' and the sheep and the fact that Bill has a contact now for the garden. I'd always wonder how those things work because you know it seems like it can be a bit off-putting if others are raiding what they see you growing. (That happens here as it is people just walk off the street and steal your fruit or whatever.) I mean I'd never begrudge someone is hungry of course but it seems like it's usually someone who can as easily afford to buy/grow their own that does it. It'll be interesting to see what the rules are here I remember several posts of the last one.

Recycling of the food waste does seem a bit cumbersome. I know here i have a little stainless kitchen counter trash can with a charcoal filter in the lid that is air tight, it could probably hold 2 weeks worth if you needed a way to just do it every 2 weeks. Hot season might find you still walking out for it. Oh does the garden compost? That might be more of a direct answer to keeping it down to a smaller amount. My aunt has one of those 3 drawer vermipost composters and it's crazy how rich the soil is coming out of that and they throw a crazy amount of stuff in there (and recycle the rest every several weeks).

That's interesting that it has more grocery options i wouldn't have guessed that.

So how are you liking the layout of the place by now? Do you feel all settled-in?

Moving into a new place and settling down is quite exciting. Happy for you. Your new place definitely looks great. The photos are beautiful. We also have a recycling centre to dump old bottles, used toys, clothing. For kitchen wares, we have a natural food waste to compost bins that converts all solid food wastes to compost that can be used for farming.

That's a great way to dispose of food waste, Andrea! Not sure exactly where the food waste goes here, but they want it to be in compostable bags, so I assume it's going to be compost. In a different town with a more organised and larger community garden, we had compost bins.

Joy, I don't think going there will be cumbersome. It's a nice walk and we enjoy it, plus we get to say hi to the critters :-) I know what sort of compost bin you mean--I worked for a time in a 'sustainable goods' store (although some products were ridiculous and not really sustainable) and we used to sell such things. People loved them. I don't have one like that, but I have a brown bin that I can keep in the fridge, now that I no longer have a tiny under-counter one. I can keep the various food bits in there until we are ready to bring them to the recycling and we can drop off glass and tins at the same time. Since glass is not allowed in the garbage or the recycling that gets picked up, we have to go there to recycle that, anyway, so might as well take the food with us :-) Yes, I feel settled in and love our wee apartment. It's nice and cosy.

Oh what a great idea, keeping it in the fridge.

I often see on some cooking pages to 'save aside' the bits you cut off of the food you eat and make it into broth like wash/prepare it put it into a steamer basket and create a broth out of it to flavor other things, which seems like a good idea. Then it's cooked down to a small mush and can't really 'go bad' in the same way as raw things. I wonder if that kind of thing is considered compostable, I've never thought about it. Oh well that's good then that it's not so bad after all it just seemed to be 'extra' so I thought composting at the garden might lighten the load but as you say you'd be going for the glass as well. (I guess both could be possible if they compost at all or perhaps one could chose to compost in their own little areas to create rich top soil for the next planting?)

That's wonderful I'm so glad you're happy with the changes, the place and the apt =) <3

Oh Whoops, I guess the parts saved aside are often put up in the freezer and added to in a baggy until an appropriate amount can be attained for the broth... (Sorry I didn't clarify although you may have done this many times already lol.)

Depresso!! LOL!! I know how that feels! My sister is crazy about coffee. I wonder how she manages all that caffeine! I also thought that the swan was a lawn ornament!! Silly me!