We went back to the recycling centre this morning. When we went on Monday, we knew it would be closed and that was fine. No need to wander around looking for it while carrying stuff. Today we brought our tins and glass. We talked to the guy there and asked him what the process is for food garbage. They do 'regular' recycling, too, so we will be able to bring our milk cartons and stuff there as well. At first, he was telling us how much it would cost per car load, but when we said we would be walking, he said it'd just be a euro.

As we were on our way there, we were greeted again, as we were on Monday, by the dog from the Inis Ean B&B. S/he has three legs, but gets around fine. S/he is very friendly and mellow, which is good considering she has an important job at the B&B, greeting guests and making them feel welcome. Even though we were just passing by, s/he came out for some praise and petting. 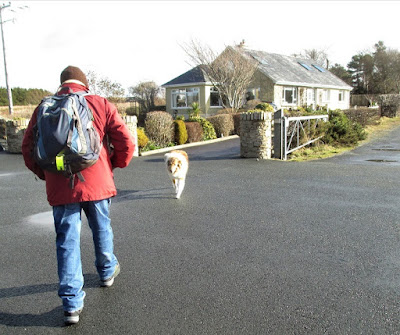 While we were putting our stuff in the bins at the recycling centre, a van pulled up on the other side of the area we were in. Suddenly, there was a very happy dog coming towards me. The tail was whipping back and forth and it could not be contained. Within a few seconds, the entire back half of that dog's body was whipping from side to side. It was so cute!

On the way back, we saw a dog that looked very like the one from the B&B standing on the footpath ahead of us. At first, I thought it was the same dog, but with a wee friend who was a fluffball covered in curly black fur. The wee one ran around on tiny legs, barking a few times so we knew who was in charge. I was concerned when s/he ran into the road--being black and very small, it would be easy for a driver to simply not see the dog until it was too late. Fortunately, it's not a busy road. As we walked by, I realised that the larger dog was not our B&B friend, because I could see 4 legs.

It's a nice walk to the recycling centre and it's even nicer with dogs. 😀

The three legged dog sounds amazing …
You seem to be settling in well to your new area :)

Yes, we're contentedly settling in :-) This was one of those situations that have periodically appeared in my life when I knew immediately that we would live here and that moving here was the right thing to do. As soon as I saw the listing, I knew and it has felt right ever since.

I've been a dog lover since I was a little girl. I also love cats.

Us, too, Vicki :-) We have rescued several of both through the years and have happy memories of them all!

I'm always toying with having a dog but don't seem to run into luck on finding one that isn't going to cost a MINT or that has questionable health history or something that would be difficult to afford down the road. "Foster Parenting" is always a possibility I guess but even at that you have to be able to schlep the dog all over the place to various adoption events when you just know you want to keep it yourself... Sigh.

Do you think you guys will get a pet eventually? You made mention of something like that earlier on.

No, we have realised, after sending time with a neighbour's dog, that we do not want to actually have any pets. We still love the critters, and we miss the ones who used to live with us, but our life is different now, our situation has changed, and for several reasons, it wouldn't be the right thing to do. This is partly about us not wanting to be tied down by having to consider a dog or cat when we want to go somewhere or to have to get up in the middle of the night, for example, get dressed and take a dog outside, even in bucketing down rain or on icy footpaths. And we would have to only live in a place where pets are allowed (we were told this would be possible when we moved back to Killybegs, but like a couple of other things we were told, this was untrue, although had we wanted to stay, we could have asked and possibly been given permission) and where there is a vet in town, since we couldn't take an animal on the bus. This limits us quite a bit. So we will just enjoy the critters we meet long the way :-)