Back Online and Cute Video With an Important Message

We're back online now. Thanks to those of you who kept your fingers crossed for us 😀 We had two issues still unresolved as of yesterday morning and it was a race to see which one would be the last. The wifi was taken care of by midday and that left the return of our security deposit from our previous dwelling. There had been no communication from the letting agent after we left--no replies to emails or voicemail. This was annoying but not surprising as this sort of thing was a problem all through our time there and was a contributing factor in our decision to leave. Late yesterday afternoon, he had someone else call to apologise for not getting it back to us sooner, so that is now done and I will not have to deal with him ever again, I hope. A friend said to me, 'I bet you'll never even consider a property that he has listed ever again.' True, that.

It was interesting to be offline for three weeks. There were things I missed--booktube, art videos, podcasts, email, search engines, and stuff like that. But in some ways, it was good. At one point, I realised that I have been off Facebook now for 3 1/2 months and that I have not missed it once. I wish I'd gotten off of there sooner. Like getting rid of Facebook, not having wifi at all led to some positive adjustments. We did have to spend time going to the library to check email and other things, since so much is done online now, but since I could not listen to the various online things I usually do, I had free time to do other things instead, which was nice. I would not want to be without access at home, but it was an interesting experience to be without for a few weeks.

One of the things I listened to instead of podcasts was a show on RTE Radio 1 called Mooney Goes Wild--a show about nature. On Monday, there was a story about a small school in County Cork, called Cappabue National School, which has 23 pupils and two teachers, if I remember correctly. They did a beach clean-up project and learned about the climate crisis. One thing that came of that was a video project. They wrote a rap song about it called One Small Change and recorded it. It has become a sensation, according to the story. The interviewer asked the kids about their experiences doing the song and the aftermath. He joked about them being celebrities. One girl said, 'Oh, it's OK now, but if this keeps up, going into town will be a nightmare!' I got a chuckle out of that and made a mental note to look up the video when I was back online. This morning, I remembered to do that. It's so cute, but they have an important message. Here's the link, in case you want to watch it. It's at The Irish Times newspaper website.

I leave you with a picture of this cute creature. We stopped to say hello on our way to the grocery store earlier in the week. And yes, I did say thank you for the wool--I always do.😄😉 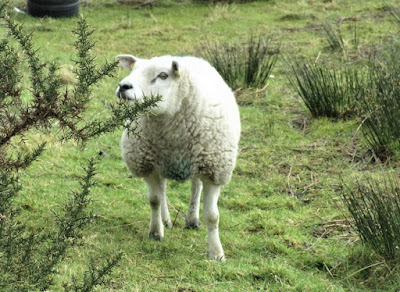 Glad you found your way back to the world of internet. We were without it for a month when we last moved. Kind of drove me nuts but at least I had it at work. lol I will watch that video when I am done here.
Have a wonderful weekend. Hugs- Diana

LOVE the video, a lot of people could learn from those kid, and that sheep is so cute!

Glad your security deposit and WiFi is finally solved.

Love the photograph of the sheep …

Thanks, everyone! I am a big fan of sheep :-) The kids are adorable--I loved the way some of them really got into the whole performance thing and hammed it up :-)