A Short Walk Between Showers

Earlier today, I got an email saying a couple of books were in at the library. It had been lashing down  rain all morning, but when there was a break, I made a dash for it. Of course, as soon as I got downstairs, it was misting again. By the time I got to the library, my glasses were off, my hair was dripping, and I was glad I'd worn my trench coat. No matter. I got my books, put them in my bag, and headed home. When I walked outside, it looked like there was some snow mixed in with the rain, even though it was quite mild. By the time I got home, it was back to mist again. The whole trip took me less than 15 minutes.

After lunch, we could see that it had stopped raining again, so we took off to wander around for a while, choosing to take roads and paths that we had not been on yet. I satisfied my curiosity about whether there was a path between two roads--there is. I'd seen what looked like an entrance to the path a few weeks ago when we were finding the GP. It's a good shortcut and allows pedestrians to avoid the chaos at a roundabout where two roads meet.

Walking along, we came to the Public Services Building. This town has just under 1200 people, so it isn't large, but it is the largest in the region, so that may be why the building is located here. 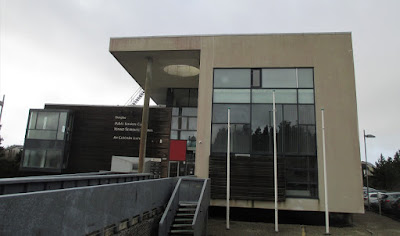 What caught my eye about the building is the one circle amidst all those sharp angles.

A bit further on, we turned onto a side street, assuming it led back to Main Street. By then, the mist had returned, softening the edges of the surrounding hills. 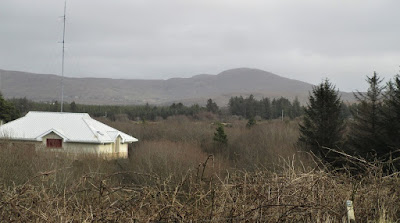 At the top of the road, we could see Main Street below. 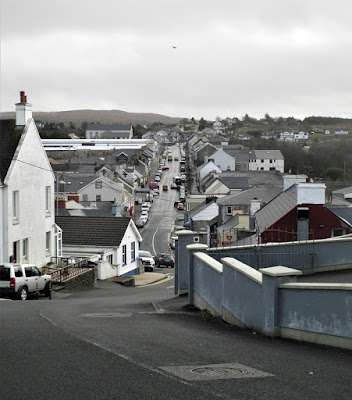 We did another short loop and I got a picture of these fun figures and their instruments (made of logs and flower pots) outside the River House B&B. 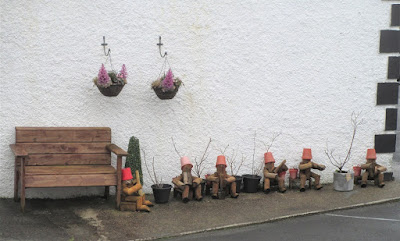 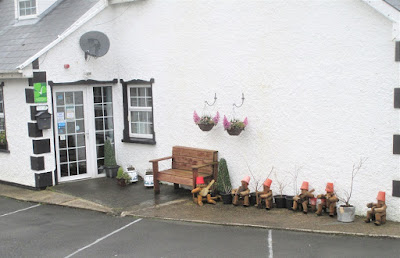 We came home, I got the pizza crust started in the bread machine then sat down with a cup of tea, which was extra satisfying after walking around in the wind. Storm Jorge is supposed to arrive tomorrow and Met Eireann has issued a status orange wind warning, so it's gonna get crazy again. This is the third named storm this month. Even with the wind and freezing precipitation we've been having, daffodils are blooming, as are these flowers: 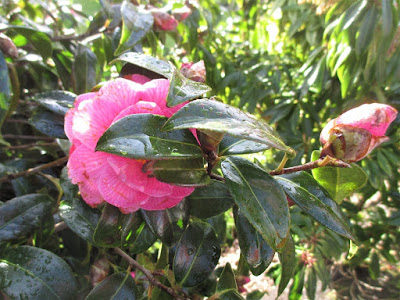 I hope things are blooming in your part of the world, too.

I do like the fun figures and their instruments...
Hope the Storm isn't too bad for you, we have a yellow warning in our area!

Take care, and enjoy your weekend.

I hope the storm doesn't cause you any harm there! They've upped the warning level to red for Galway and Clare, so it looks like they're getting the worst of it--let's hope people heed warnings and no one gets hurt.

Stay safe and have a good weekend!

I love seeing your photos of your new town. That flower is beautiful and I loved the log and flower pot people. Stay safe during the storm, I hope it doesn't damage anything!

Thank you Vicki and Brenda! At the moment, the wind isn't bad and the sun is out, even though the orange warning is in effect. Maybe it won't be as bad as they thought here. We had snow falling for a while earlier, which turned to rain.