Last autumn, a friend/neighbour returned from a trip bringing me a bunch of goodies she'd picked up at a thrift store. Included in this haul were 6 balls of yarn made of silk and cashmere. It is so soft and squishy! I had 4 balls of a grey-blue, one in cream, and a brown. Ideas went around and around in my head as I considered what to make. Did I want to use it all in one project or use the grey-blue separately? I started and ripped out a few times. Finally, in late spring, I decided to use the cream and brown together in this neutral colourblock cowl/neckwarmer. 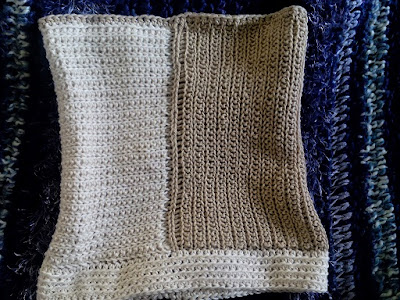 I started with the brown and made a rectangle that was half as wide as I wanted the neckwarmer to be. I did Tunisian crochet, alternating knit and reverse stitches, until I was almost out of yarn. Then I turned that rectangle sideways, and with the cream, picked up stitches along the edge and did the same stitch until I had the width I wanted. I slip stitched the working end of the cream rectangle to the other side of the brown rectangle and then crocheted around the top and bottom edges.

I loved it from the start, but given the time of year, it was too warm to wear then, so I left it out and looked at it for a few days, before putting it away to await a better time of year. That happy time has arrived and it's cool enough for me to wear it today. Yay!

Happy cowl/neck warmer for you ... Yay! 😅
Have a nice week ahead!

Thanks, Ella! Wishing you a nice week, too!

That will keep you nice and warm.

It's good that I had it ready :-) It's chilly, but not cold enough for heat yet, and even when we do start with the open fires, we only have one going for a few hours in the evenings, so it's cool in here. Always happy when I can be covered in wool, mohair, and now silk and cashmere ;-)