Another calendar page has been turned as we move deeper into autumn. We moved our clocks back last weekend, so I've been enjoying the earlier onset of darkness and having lots of cosy time reading, crocheting, and doing some cross stitching. I love, love, love this time of year.

Last month, I put a dent in the ever-growing charity shop book piles. Of course, I think I brought in almost the same number of books that went out, but at least I didn;t have to find more space for the new ones. Anyway, here is the first part of my October book list:
A Good House by Bonnie Burnard

I picked up this book in a local secondhand shop. It was published in 1999 and won The Giller Prize (Canadian) that year. It’s the story of the Chambers family, beginning in 1949 and ending in 1997. Bill Chambers returns to Canada after WWII having lost three fingers on his right hand. He and his wife, Sylvia, have three children, Patrick, Daphne, and Paul. Murray is a local boy who becomes like one of the family. The book is divided into chapters, sometimes with a gap of a couple of years and sometimes longer. The author does a good job of moving the story along and concisely catching the reader up on what has happened in the intervening years and occasionally, on what will happen in the future. I enjoyed this book, although I can’t really say why. I had to force myself to go to bed at 3 am instead of reading on one night. I guess I was just drawn to the characters, even though as more children were added there ended up being a lot of them—sometimes maybe too many. The book did not get really deep into any of them after the first couple of chapters, possibly because, as more people were added, depth was impossible. This did not really detract from the book for me—it was a good read and I’m glad I found it.

Grasshopper by Barbara Vine (Ruth Rendell)
Clodagh, now an electrician, is writing a narrative of events that happened 11 years previously when she went to London to attend a polytechnic and lived in a basement flat. This was not an easy thing, since she suffered from claustrophobia. She had a thing for heights as a result and, as a teenager, had been involved in an accident on a pylon in which someone died. When she meets a young man who lives in a flat on the top floor of a neighbouring house, she is introduced to the world of roof climbers. As this becomes the centre of her world, things move in unexpected ways. I picked this book up at a secondhand shop and it was without the dust jacket, so I had no idea what it was about. I generally like Rendell writing as Vine, so I bought it anyway. It didn’t grab me immediately, but it was good enough to keep going and eventually, I got into it. Good book!

Wild Ways: New Stories of Women on the Road, edited by Margo Daly and Jill Dawson
This book is about 20 years old. I found it at the library, when they were selling books they’d pulled from the system. The short story writers included are from Canada, Great Britain, Australia, New Zealand, and Jamaica. The stories are set all over the world. I found the book to be a mixed bag. A couple of them were very powerful and gave me goosebumps. I didn’t care for one or two of them. Others were in between.

The Thin Ghost and Other Stories by MR James
About a year ago, I came across a different book of ghost stories by this author in the e-book section of the library website and checked it out. I enjoyed it and it dawned on me that I could probably find more of his work at Project Gutenberg. I checked and there he was, so I downloaded a few of the available titles. I decided to read it now for the season that’s in it. I tend to think of ghosts as a Halloween thing, but many of the older ones were meant to be read/told at Christmas. Indeed, one of the stories in this collection takes place at Christmas. It’s a nice little collection.

This afternoon, I started a new book, set in Ireland and by an Irish writer. The first chapter contains a description of the main character's home, filled with books on side tables, in alcoves, etc. He gets them at charity shops, she writes, 3 for a euro or maybe 5 for 2. I laughed. I could relate. It's especially great when I stumble across a book or an author that I've never heard of or wouldn't think to look for or an older book that's not so readily available anymore. Sometimes these are disappointing, but often they're wonderful. For a different kind of experience, Aldi has had gin and tonic crisps as well. I haven't tried the other things, but I've tried those and they're not very good. I'll stick with cheese and onion or Thai sweet chilli! 😊 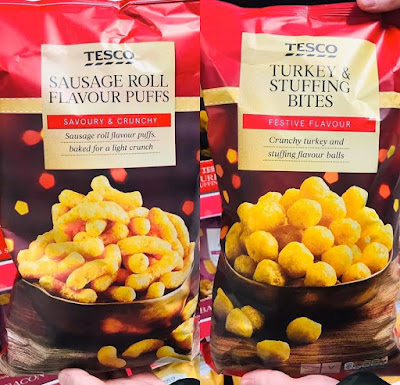 They weren't good. I'm curious to see what flavours will be coming out soon--they always introduce some strange things at Christmastime!