Four Out, Four In

We went to Donegal Town today to drop off and pick up books at the library. It was a relief to get off the bus and into the fresh air! The driver had the heat on full blast--he was sitting there in his short shirtsleeves. Everyone else had on hats and coats or jackets, because it was alternately lashing down rain, drizzling, or just grey with a cool breeze.

On our arrival in Donegal Town, our first stop was the Animals in Need charity shop, where we dropped off four books and a few other small things. There was a couple that arrived at the same time we did. They were carrying a large bin bag each full of clothes. They placed it in front of the counter with the many other bags. It looks like they have a whole lot of donations coming into the shop, which is great. After we handed over our donations, we went over to the bookshelves. I picked up a vegetarian cookbook, which may or may not be useful, but even if it doesn't spark any good ideas, by buying it, I cleared off a bit of space and made a donation to critter care, so what's not to love? Then I saw this book: 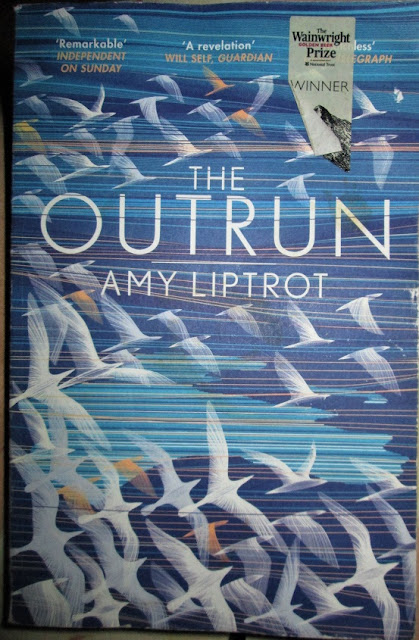 I love, love, love the cover! I'd seen it before, but on my computer screen. It's new to the e-audiobook section of the library website and the picture of the cover there induced me to click on it to see what it's about. It sounds quite good--a 30-year-old woman is having addiction issues and goes back to Orkney, where nature helps to heal her in various ways. It's a memoir. It also sounds vaguely familiar. I don't think I read the book, but I'm wondering if I read an excerpt of it at one time or whether it just sounds similar to something else. I did not borrow the audiobook, because I have a lot of stuff to listen to at the moment, but I thought I'd go ahead and get it a couple of months from now. When I saw the book in the charity shop, I did not hesitate. I had to pull it out from the middle of a rather precarious pile on the floor and then rearrange the pile, because it was about to fall down. This is the second time that I have been in that particular charity shop and found a book that I was planning to borrow in e-audiobook format.

Bill also found a couple of books, so in spite of the fact that we are attempting to take a library break for a while so we can make a dent in our own book piles, we ended up coming home with 4 books to replace the 4 we'd donated, so we're even. Oh well. The book piles might not be any smaller, but it's not any bigger, either. At least until we next visit a charity shop.😉😁
Share
Posted by Shari Burke at 12.11.19

I LOVE the idea of a store selling books where the money goes to help animals! We don't have anything like that here :(

I love the cover too!

Vicki--charity shops are a big thing here. Some are devoted to specific organisations, like the Animals in Need one and some donate to many different groups. It's nice to know that when we buy from them, the money is going to help people and animals and that stuff is being kept out of landfills! Win-win!

Ella--love having a book in my hands :-) A friend gave me an e-reader for my birthday a while back and I found that I do like that for old/classic books. We've moved a lot in the last decade, so it's nice to be able to carry hundreds of books on a small device. I also bring it when we go away for a few days. And if I get an urge to read a Golden Age detective story or some Jane Austen, Dickens, or some other author from a bygone age, they're all right here :-)

Wonderful cover is right! And I have found that people do judge books by their covers. ;)

P.S. Woo-hoo! My comment actually came through. In the past, I have had a hard time leaving a comment directly on your blog. But today, success!

It's true! I might not have clicked on it in the first place if I hadn't been drawn in by the cover. I sometimes think about how cool a wall of framed book covers would be :-)

Some people do have trouble with comments on both Bill's blog and mine and some have no problems. We've not been able to determine what the issue is. We both had the same problem with Wordpress. Bill worked it out for himself, because in his blog group there are many Wordpress blogs, but it took him a long time and much aggravation. These kinds of things bug him until he figures them out--LOL. I would be that patient with yarn, but not with computer stuff, so my issues in that regard remain :-)