I'm linking up with 'First Chapter, First Paragraph' hosted by Vicki at I'd Rather Be at the Beach. Each Tuesday, people post the first paragraph or two of a book they are reading or plan to read soon. Today, I present the first couple of chapters of The Outrun by Amy Liptrot. I found this book last week in a charity shop and in a weird coincidence, the author was on the BBC Radio 4 show/podcast A Good Read the same day.

Prologue
Under whirring helicopter blades, a young woman holds her newborn baby as she is pushed in a wheelchair along the runway of the island airport to meet a man in a straitjacket being pushed in a wheelchair from the other direction.
That day, the two twenty-eight-year-olds had been treated at the small hospital nearby. The woman was helped to deliver her first child. The man, shouting and out of control, was restrained and sedated. 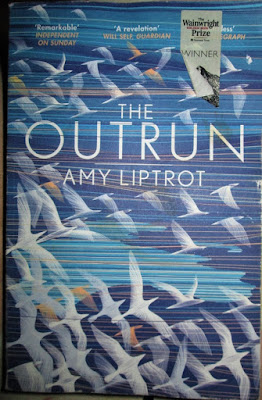 Note to readers with Wordpress blogs:
Thank you to everyone who has added links to their Tuesday books! I have read each post. Unfortunately, for whatever reason, Wordpress will not allow me to comment on the blogs on their site. I have had this problem for a long time and have given up with them. I have tried again today, but the problem remains. So if I do not leave a comment, it's not because I haven't read the post, but simply because Wordpress doesn't let me comment!
Share
Posted by Shari Burke at 19.11.19

(Diane) Bibliophile By the Sea said...

Gorgeous cover art and an intro that makes me want to know more; enjoy1 here's mine:

Fascinating excerpt. Thanks for sharing, and here's mine: “THE FAMILY UPSTAIRS”

I think it's a very interesting book ... it's exciting right from the start! Two people with a distinctive character! After reading maybe you make a review for us! Thanks!

Diane--yes, I was drawn to the book because of the cover and when I read the blurb, I knew I wanted to read it. Thanks for posting about the book you're reading. I've not heard of it before.

Great excerpt - the man in a straitjacket really intrigued me! lol
Here is my Tuesday Teaser / First Chapter Pick! Have a great day!

Thanks, Sassy Brit! I'm curious myself to see how he fits into the narrative. The book you posted sounds intriguing! I tried to leave a comment, but Wordpress doesn't let me do so.

That sounds really interesting! I can't imagine how the two are connected, but I'm sure they are...

Now that is quite an opening paragraph. Hooked me!

It was surprising--the book is a memoir and I'm curious to see how it fits in with the author's narrative! It's a great opening!

Wow, that intro sure made me curious. I'll look for a copy.

Loved the book, Vicki--definitely worth a read :-)