We went to Donegal Town today to drop off and pick up stuff at the library and as usual, we went to Aldi for a few groceries while we waited for the library to re-open after lunch. We walked in and heard a witch cackling. Every time someone came in, we heard the cackle, which was wired to go off when the motion sensor detected a new arrival. Aldi (and Lidl) usually have more Halloween stuff than the other grocery stores we've frequented since we've been in Ireland, so I expected to see some of the stuff that was there. Just behind the Halloween stuff, was the Christmas stuff. I was surprised to see so much of it already. 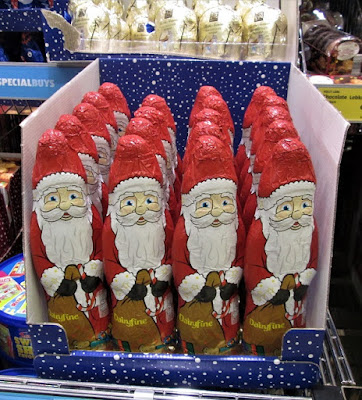 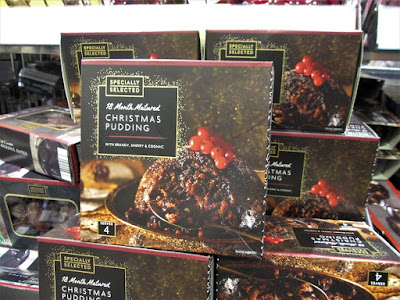 In past years, the Christmas puddings have been the first to show up, but this year there's a lot of variety already. There will be many more Christmas puddings in various sizes and types on display soon. I have never had Christmas pudding and have no idea what the differences between them are. They appear early and stay around for a while after Christmas in some places. Back in May or June I saw a Christmas pudding on the shelf at our local SuperValu. They also had some Santa and snowmen ice cream things in the freezer case at that time. The boxes were dented and looking a bit frosty (😁😉😝). I suspect the ice cream inside was full of ice crystals. I cannot imagine who would have bought them.

We didn't get any Christmas or Halloween stuff. When we were waiting to get to the till, I saw that the woman behind me had a round loaf of barm brack. I love that stuff and look forward to it every year. Then I eat it regularly, get tired of it, and am ready to leave it alone until it comes back the next year. I almost dashed back to get a loaf, but we would not have been able to fit in in the backpacks without smooshing it, so I opted not to--I can get some at SuperValu tomorrow or the next day, probably. It should be showing up there soon, if it's not there already.

I didn't know what barmbrack was so I did a search for it. I think I'd like it and my make it sometime.