Here we are in the month which brings us autumn! Yay! August turned out to be a month full of mystery books, with a couple of others mixed in. Here are the first few:

St Peter’s Finger by Gladys Mitchell
Last year, I either read in an article or heard in a podcast, a mention of Gladys Mitchell. I’d known about the Mrs Bradley mysteries, but while I’d heard a couple of radios dramatisations, and watched one episode of the TV version, which I didn’t like, I’d never tried the books. I decided to give them a try. There were a couple of e-books in that collection at the library website, so I started with the one that was available. I liked it, so then looked up the entire list of titles, of which there are more than 60, and beginning with the first few, placed my requests at the library. I’ve been moving through the list sporadically ever since, getting a few, reading them, waiting a while and getting a few more. This book is part of the current batch I have checked out. In it, Mrs Bradley is asked by her son, the amusingly named Ferdinand Lestrange, to investigate the death of a schoolgirl at a convent. She agrees. As with all the books, there are quirky characters and larger issues addressed. In this case, it’s religion, class, gender roles, and, as always, psychology—adolescent psychology in this case. Mrs Bradley is a psychologist which, given that the first book was written in the 1920s, would have made her unusual. It seems that Mrs Bradley’s ideas about her profession evolve as the books proceed, which is one thing that is interesting about them. Another thing that I enjoy about the books is that they are all so different. To be sure, there are characteristics about Mrs Bradley that remain the same, although she does not yet seem to age (just as well, since she is aged from the start). But the settings and the themes addressed in the books are quite varied from one to the next. I mentioned above what some themes of this book are. In previous books, Mitchell focused on folklore, anthropology, and myth. In others, art and drama are involved. I have to say that the first book was not what I expected a mystery of that time period to be and it took me a bit of time to get into it. But I am so glad that I started reading these—I enjoy them a lot.


This book was published in 1939, so in the early days of WWII. At the behest of her nephew, Carey, and a friend he makes on holiday, Mrs Bradley gets involved in a case involving Nazi spies, refugees, and anti-Semitism.

Brazen Tongue by Gladys Mitchell
Gladys Mitchell called this book ‘horrid’ in an interview. I wouldn’t far, but it did seem different than the other Mrs Bradley books I’ve read, although I can’t put my finger on exactly in what ways this is so. It takes place during WWII, so petrol rationing, domestic war work, and other such issues are featured in the story. That alone makes it different, I suppose. It did seem to get a bit convoluted at times, but so did some of the early books. In this story, three bodies are found in one town. The local police inspector thinks they’re linked, but are they? Because Mrs Bradley arrives to investigate, since her niece was at the scene where one of the victims met their end.

Shroud for a Nightingale by PD James
I found this omnibus edition containing three Adam Dalgliesh novels, none of which I’d previously read, in the local charity shop, so I picked it up.

The Black Tower by PD James

Death of an Expert Witness by PD James 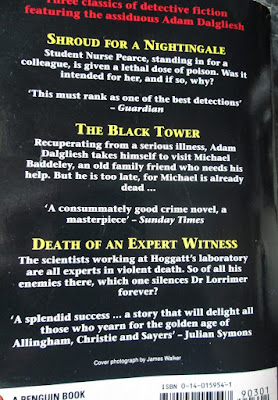 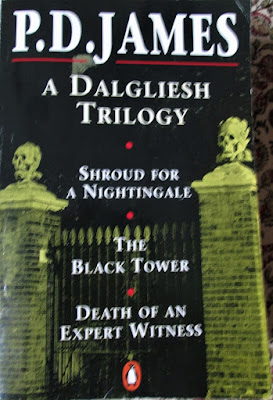 I've never heard of any of those books. I bought 20 books at my local library sale recently.

What a great haul at the library sale! Fun! Several months ago, the library started having books for sale on a table. They were all books that they'd pulled from the collections. The librarian was so happy when we bought some and I made some comment about there being space on the table. He looked at me funny and said he had 5 more boxes. I wondered why he only had 10 or 15 out at a time. He said, 'I should just put the boxes out, shouldn't I? People would probably look through them.' I nodded. It's a very small library--2 rooms, although a new one is being built. So there wasn't room for all the boxes, but he did start keeping boxes under the table. Every time we'd go, we'd end up with more books that we bought. Anyway, enjoy your bookish goodies and stay safe as Dorian does his thing--hopefully he'll go out to sea!

Me, too, Brenda! Bill found another one the other day in the wee free library when he went to drop off a couple of books and brought it home--yay!