The container veggies are starting to look bedraggled now, as we move ever closer to autumn. I pulled a couple of radishes and had to discard others because it appears that they are being eaten by earwigs in the soil. I have more seeds, so might go ahead and plant some more--I've been succession planting throughout the last several months. Most of the lettuce is done now. The beans are growing well and have flowered, but I think maybe birds are eating the baby beans off the vines, because one day there's a wee bean and the next day there isn't. I have more beans growing in a different spot. I planted those seeds later, so it remains to be seen whether or not they will have time to grow. They're looking quite good so far. We have plenty of scallions. There are courgettes--small, but tasty. I picked one the other day. The cucumbers are doing surprisingly well and we have many of those on the vines. The chard grows like crazy and I went out and pulled a bunch of that after we got home from picking up some groceries this morning. There is still more growing and as that's a cool weather crop, I might as well go ahead and plant more in the newly available space. Unless we get some kind of freak cold snap, that should grow well for another couple of months at least.

I spent a bit of time in the kitchen this afternoon getting veg ready for the freezer. 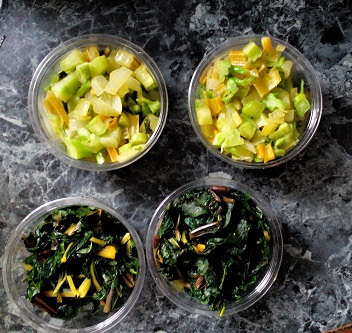 Bill has to be careful about Vitamin K, so when I freeze K-rich foods, I do it in small quantities so I can take out as much as I need. If he can't have any and I want some in soup or something, I can take out one container for myself. I also like that I can see through them. My big freezer is pretty full, so I'll put these in the tiny freezer compartment of our under-counter fridge. I put containers of water in there to freeze, just to fill up the space because it seems like it'd be more efficient to have something in it, so I have plenty of room in there.

The chard cooks way down, so I got the two front containers from a pot full of raw chard. The other two containers have thicker chard stems, chopped broccoli stalk, and onion that I cooked in some olive oil. Bill can have a bit of K at the moment, so we bought a head of broccoli the other day. I used a bit on our Friday night pizza (along with onion, bell pepper, sun-dried tomatoes, and jalapenos). I cut up the rest this afternoon and got the two containers ready for the freezer. I cooked the rest of the florets, some smaller chard stems, and onion in a bit of olive oil and set it aside to use for supper. I'll mix that in with some smashed potatoes and we'll have it with omelettes.

And now, time for a cuppa, I think! Hope your day is going well.

Your posts make me wish I had a green thumb and was more crafty. My mom was both but I didn't get those genes. I would like to try a raised garden next year. I've been looking online and on Pinterest for ideas and think I have a pretty good idea of how I want to do it. I'm tired of buying fruits and veggies at the store and a lot them going bad before I use them. I used to go to the Farmer's Market but we moved and I don't want to drive that far. There is a produce stand that's closer, but I don't get out that way very often.

It's so nice to be able to pick fresh veg. We are limited in what we can grow here without a polytunnel, but what we have is nice. We used to belong to a CSA in Maine and it was so much fun to go each week and see what was harvested that day. We learned when various things would be ready and we looked forward to strawberries, tomatoes, potatoes, and other things. I grow scallions, rosemary, and garlic chives inside all year--it's amazing how even just a few snips add such a freshness to certain things. One reason I like container gardening is that I really don't have to do much. This year I've hardly even had to water. I save used coffee grounds and tea leaves and dump those in once in a while and I chopped up banana peels and buried those in a couple of pots, so that provides nutrients.

Raised beds would be great and you'd have a nice long growing season. When we were in a different town there was a community garden and we had raised beds there--a couple inside a polytunnel and one outside. They used a layering method and never did any digging. They'd burn off the weeds with a flamethrower (!!!!) in the spring and then spread a layer of compost over the bed, rake it even, and then start planting. The weeds were easy to hoe when they were very small and they just lay there and shrivelled up. It worked really well!

Anyway, have fun with the planning!