The wind has picked up these last couple of days and I've been grateful. Even if the sun is shining and it's warmer than I'd like, a breeze or light wind makes things less uncomfortable. Bill commented that it was a bit nippy today. I couldn't go that far, but I said it felt like we were possibly nearing the verge of  nip. 😀

August in Ireland has always reminded me a bit of August in Fairbanks. In both places, there is fireweed to watch as the blooms move up the stem as the summer moves towards autumn. In Fairbanks, August was always the month when that first real nip would appear. I used to let the dogs out every morning and sniff the air to see if there was a hint of the crispness that the short autumn would bring. The leaves would start to turn. I am seeing the first hints of that here. Of course, the big difference is that in Fairbanks, it really was the beginning of autumn and by October, if it hadn't yet snowed, we knew it soon would. It's a teaser here and it won't last. It will get sunny and too warm again. But I'll take what I can get. No matter the weather, it is getting dark earlier at night and light later in the morning. It makes me happy to see it getting dark at 9ish now instead of 11ish. I was awake (briefly) at 5:15ish this morning and it was as light as it had been at 4 a month and a half ago. And it was breezy enough that I could close the bedroom curtain to block out the light and still breathe. Yay! As is usual for me, I feel much better in August than I did in July.

We went off to get some veg from veg man's stall this morning. The sun was sort of shining and the breeze was blowing. Good day for a sail. 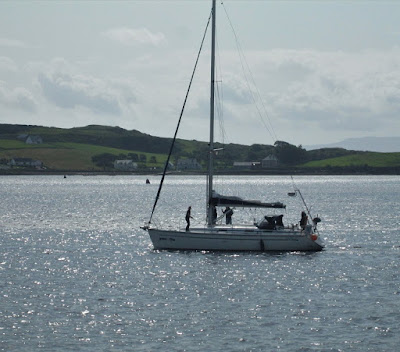 But by the time we were on our way back a little while later, the sky had darkened.
After I stopped to look at the building colours popping under the dark sky, I looked over and saw these wee hydrangeas. 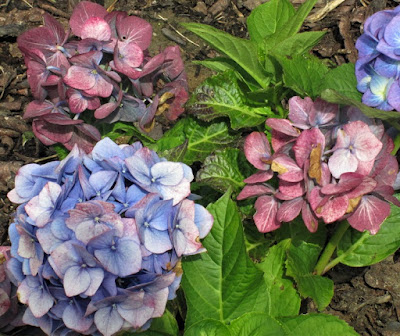 The hydrangeas here grow in such rich colours, like deep red, neon pink, bright blue, and purple. I love them.

When we were almost home, we felt a few raindrops, which quickly turned into a shower. The wind was at our backs, so that's what got wet. Since I couldn't sit down without soaking the chair, I changed as soon as I got home. That's OK. It was a nice refreshing brisk walk, which I enjoyed. The sun came out again as soon as we got inside. Since I don't have to go out in it, I'm OK with that!

I hope it's a pleasant day in your neck of the woods, too.
Share
Posted by Shari Burke at 17.8.19

I loved reading about your weather and changes that signal autumn's arrival. We have had a very hot (for us) summer here and more rain that normal. So, it has been a hot humid summer. Looking forward to fall here, too. xoDiana

Love the photos, especially of the water/sailboat and the hydrangeas. Our summer started of really hot and humid but lately it's been cooler which I'm loving.

Thanks, Vicki! I'm so glad it's cooler there--it's always such a relief when cooler weather arrives after heat and humidity.

Nice hortensia's. The colors are so beautiful.