In addition to the short story collections, haiku, and fiction that I read and listened to in July, I had a few excellent nonfiction titles in the mix as well. Here they are:

Walking: One Step at a Time by Erling Kagge
Reflections on walking, whether it’s to work on a weekday morning or across Antarctica. The author draws on his own experiences as a walker to consider how walking improves his life and his ability to see things in a different way. Bill and I, both walkers ourselves, could relate to a lot of what he was saying.


Constellations: Reflections from Life by Sinead Gleeson
I used to listen to Sinead Gleeson when she was host of The Book Show on RTE Radio 1. A few years ago, she edited a collection of short stories written by Irish women, many of whom had been forgotten. Bill bought me that book, called The Long Gaze Back, and it’s a great book—definitely a keeper. Shortly after that one, she edited a collection of short stories by women from the north of Ireland (if I recall correctly both Northern Ireland and the northern part of the Republic of Ireland) which was also good. When I read an excerpt of this book, I went right to the library website and added my name to the queue. I waited a while, but it was worth the wait.

The book is an essay collection that adds up to a sort of memoir. It is structured around the author’s experiences inhabiting a female body in Ireland at a particular period of time. As a child, she was diagnosed with an uncommon problem that required many operations and caused her to be in a lot of pain. She missed a lot of school and spend a good deal of time alone in bed, recovering. Books, she tells us, were her friends. As an adult, she had other health issues that have shaped her life. While she organises the book around these physical traumas, she also connects them, as stars are connected in our minds to form constellations, with books, art, religion, memory, relationships, and more. Great book!

Falter: Has the Human Game Begun to Play Itself Out? by Bill McKibben
I first became aware of this book when Lit Hub published an excerpt. I looked at the library, but it wasn’t in the system. I kept checking back until a few weeks later, there it was. I placed my hold. The central question of the book is there in the subtitle. McKibben discusses this question in relation to the climate emergency currently underway, as well as the ongoing development of AI. He’s been sounding the alarm about climate change for 30+ years now, so that part of the book is a continuation of that work. He points out that we have a narrow window of opportunity to minimise the damage, but that time is running out. He lays out some of the structural obstacles to meaningful change put in place by various governments and he wonders whether there is really a will on the part of people, especially in wealthy nations, to make the necessary changes. He tells the reader about a collaboration between poets, one from the Marshall Islands, which is already contaminated due to US nuclear testing and one from Greenland, which is melting (with the highest level of glacial melt in one day just a few days ago). he provided excerpts from the poem they wrote together and it is powerful. We would all do well to listen to what they have to say. I went in search of the entire poem, and found this video of the poets themselves speaking it.

When he moves into the AI segment of the book, he gives an overview of what is going on with that technology and shares the views of some of the people working in and funding this area of research and experimentation (and some of them are pretty out there). He does all of this to then ask the question, ‘Is this really a good idea?’ From there he proceeds to tell readers what some of the dangers are, including the possibility that the technology will eventually evolve into something beyond human control. This wasn’t a fun, fluffy read, but it was a very interesting and thought-provoking book, which poses questions that we should all be considering. I’m glad I read it.

I deconstructed my newly acquired charity shop necklaces yesterday and got the beads and other pieces into containers, so now they're ready to go whenever inspiration strikes. 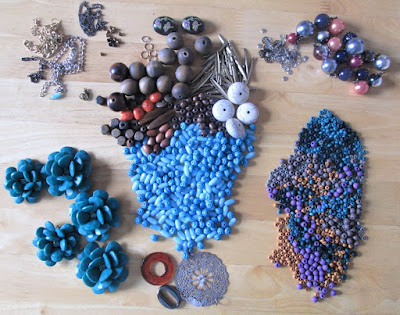 You can just see one tiny metal bead by itself off to the right of the chains. I had a whole pile of those, but I'd put them in a container before I took the picture.

I thought the colourful pile of wooden beads--all from one necklace--looked pretty cool as it sat there in an abstract sort of way. 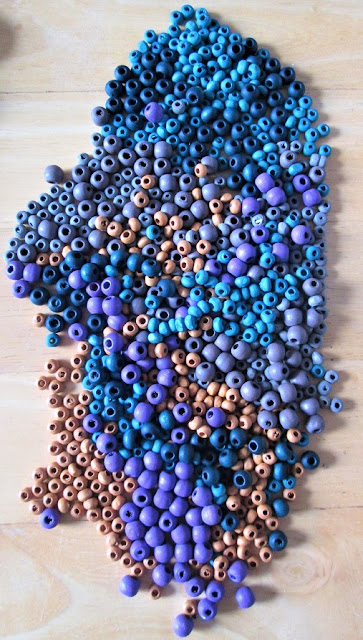 It's the summer bank holiday weekend here, so of course it rained. This made me very happy, of course, and I hope there's plenty more where that came from, but I did experience a twinge of feeling for the firefighters down the hill, who are doing a car wash fundraiser. Yesterday, when it was sunny, warm, and dry might have been a better day for them. Anyway, I enjoyed the rain shower, finished a book, and might cast on a sock shortly. I hope your day brings plenty of simple pleasures, too.
Share
Posted by Shari Burke at 3.8.19

I love books about walking. Have you ever read the The Walk Series by Richard Paul Evans? I loved it! Pretty beads!

I've not heard of that author. I'll look it up :-) I'm really happy with the beads--the charity shops always have a lot of necklaces and it's fun to find some with parts I can use. Enjoy the weekend!