There were times in July when I was so tired that I felt like I couldn't really focus on much of anything. At times like that, it's nice to have comfort reading. For me, that usually means Golden Age or cosy mysteries and short stories. I posted about the short story collections I read yesterday and here's the mystery portion of my July reading.


Overture to Death by Ngaio Marsh
As part of my July ‘comfort reading’ I turned once again to Golden Age detective fiction, continuing on with Ngaio Marsh’s Roderick Alleyn series. In this novel, a community theatrical performance does not go as planned when, as soon as the prelude beings, the piano player winds up dead. Alleyn is called in, since (of course) the local force is stretched thin and the case is complicated.

A Death at the Bar by Ngaio Marsh
Luke Watchman, a well-known barrister, is off on a holiday to the Devon coast. He is looking forward to the annual meet-up with his cousin and a friend. Sadly for Luke, his holiday doesn’t last long, because he is hit in the finger with a dart during a bet and succumbs to potassium cyanide poisoning. Roderick Alleyn is called in to investigate.

The large Lamprey family, back in London from New Zealand, is short of money—a usual state of affairs for them. They’ve decided that the only way to get out of the current mess they’re in is to call on the father’s brother, who has the family money, home, and title, and ask him for help. This guy does not think well of his brother or the rest of the family and when he arrives at the Lamprey flat, things do not go well. He angrily storms into the lift to leave, but by the time he makes it to the ground floor, he has suffered a gruesome injury. He hangs on a little longer, but in the end, Roderick Alleyn is called in to investigate the murder.

I'm frequently torn between spending time stitching or reading. I know some people do both at once, but I've never been able to do that. Happily, the library has an e-audiobook section that allows me to download audiobooks at any time of the day or night. This is a good solution, as long as the reader is good. I've returned books without listening beyond the beginning when I found the reader annoying, but I've also listened to several good books, including this one:


I wasn’t sure about this book when I saw it. I decided to give it a try, since I could easily delete it if I didn’t like the story or the reader. Turns out, I quite enjoyed both and I was soon into the story and, on more than one occasion, unable to stop laughing. I am not familiar with this author’s work beyond this book, so I don’t know whether the humour is usual. Phyllida Nash was an excellent reader, too, and she might have had something to do with why I thought parts of the book were extremely funny. That’s not to say it was a comedy, though. I’d be laughing one minute and then feeling a bit of heartache a few minutes later. I also smiled when the main character mentioned at one point that she was listening to Allegri’s Miserere, which is one of my favourite pieces of music.

The story is written in the form of a journal, as you can tell from the title. Amy Wingate is a middle-aged former teacher who has taken early retirement. She lives in a ‘tall, thin, house by the sea’ and has bursts of rage that she finds inexplicable. She seeks advice for this and it is suggested that she keep a journal. She decides to give this a try at the same time that events in her life begin to demand more of her time and attention. The journal is a way for her to process what is happening and her thoughts and feelings about these events. This process naturally leads her to consider how events from her past have impacted her life. She attempts to keep things buried, but as she keeps writing, more comes to the surface.

I enjoyed this book a lot and I’m glad I gave it a chance.

I'm definitely a listener and not a watcher--I don't have a TV or go to the cinema. I subscribe to a bunch of  podcasts and regularly check for new audiobooks to download so I'll always have something to listen to while I stitch. I also keep my eyes open for stitching supplies, and I had some great luck in that regard this week.

The other day, we called in at the Animals in Need charity shop in Donegal Town. I always check their 1 euro board that has necklaces pinned to it--it's where stuff goes that has not been selling. I chose a couple of necklaces for the beads. 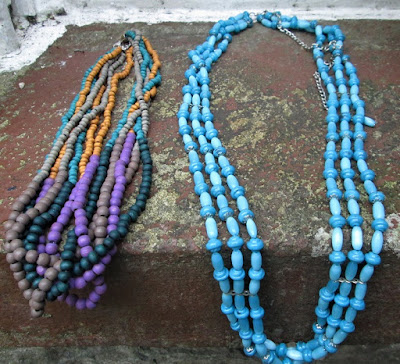 As I was paying, I noticed a basket on the counter. It was full and had a sign on it saying 'free to good home.' 'Well,' I thought, 'I have a good home and I quite like this metal bit.' 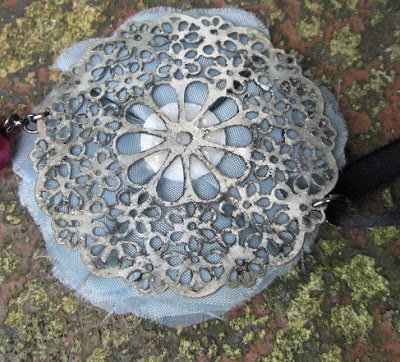 I pulled it out and discovered this:
I don't want the fabric flower bit, so will take that off and keep the metal piece it's glued to. As I was pulling this piece out, more beads caught my eye, so I took those as well. There was more there than I thought, having only seen the wooden beads while it was in the basket.

Yesterday, we walked down to our local charity shop. We go every couple of weeks to see if they have any plant pots that aren't too small, since the number of houseplants we have keeps growing. We were lucky and found one. I also scored a couple of necklaces there.
I'll deconstruct all of these, saving the findings, chains, and all other usable parts as well as the beads and other bits. I've got a couple of things in progress that I was stalled on and some of these parts will be perfect for embellishing those. I was going back and forth about how to finish them and now I know. I'm really pleased--I found some great stuff to work with, supported community projects and animals, kept stuff out of the landfill, and none of this came with any packaging, as it would have if I'd bought beads or findings online, so no packaging for the landfill, either. Wins all around!

Beautiful colorful and special chains. You could mix them nicely. Or stick them on a flower plot (on the edge). You can make so many beautiful things with beads!

We are at home again now after a week "Limburg". So, I am back to read blogposts :)

Great idea about the flower pot!

Glad you enjoyed some time away and welcome home :-)