The End of July--Yay! And Books

Here we are on the last day of July. At the beginning of the month, I wrote on the calendar page for today 'another month closer to autumn.'  Ad we're closer to another season, too--saw this guy in a shop window a couple weeks ago: 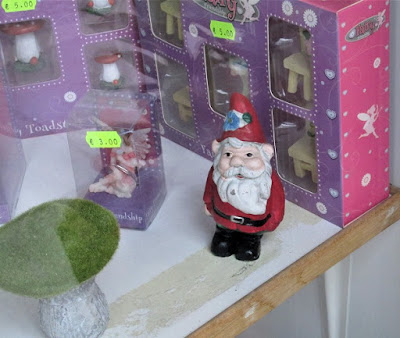 As I said in a previous post, I dread July every year and it's always nice when we're past it. I have to say that this July has been better than last, possibly because we did not have a heatwave and drought, as we did last summer. Also, I have done a better job of accepting things as they are and taking steps to care for myself. One unexpected thing that happened was that I spent a lot less time online than usual. I particularly stayed away from Facebook. That page has been annoying me for months now. I know that they push people to use the site in certain ways and that everyone has their own ways of setting things up. I have a limited use for the page to begin with and have tried to streamline. I found groups to provide nothing but page clutter, so I left the ones I was in. I am not interested in the chat function, so I always turn it off and minimise the list that clutters up the side of the page. I don't use the marketplace. In short, I used it as a news aggregator, a place to see various artwork, and as a tool to follow people and blogs. I used to set things to 'most recent' and scroll through my newsfeed, sharing and responding to certain posts. Then this setting stopped working and there was no difference between having 'top stories' checked off or choosing 'most recent.' I would get posts at the top from several hours or even a day or two before. Not interested. I tried to edit my preferences, which was useless, of course, and when they asked if this was helpful, I clicked on the negative answer. This brought up a box asking me to elaborate, which I did. After that, things worked properly for a month or two, then went back. I tried this again, but when it reverted back, I just thought, 'Why am I allowing myself to be aggravated?' I know--when I set up an account, I agreed to pretty much let them do what they want and what they want is to make money in various ways off of my activity on the site. I don't get to have things set up as I want them. But I get to choose whether or not to participate on the site the way they want me to and right now, I am choosing not to. So, I allowed them to send notifications if I had one specific to me, even when I don't have the page open. I bookmarked the news sites I am most interested in and go to those pages, instead of viewing stories through Facebook. I get blog posts sent to my email wherever possible. And I don't bother with Facebook, except to answer messages when I get them. This has been great--freed up a lot of time, for one thing and I find I don't miss it at all. Bill got annoyed several months ago and stopped spending time there as well and he says he has no interest in going back. Neither of us has deleted our accounts, but I am not sure what I will do in future. For now, I'm happy enough with the way things are.

Of course, I filled up some of that free time with books and here are some thoughts about a few of them.


Cat’s Eye by Margaret Atwood
One day, in our local charity shop, I came across a book containing two of Margaret Atwood’s books in one volume. The first book was a short story collection and this was the second book. It’s a novel, published in 1988, in which the main character, artist Elaine Risley, returns to her home town of Toronto for a retrospective exhibition of her work. While there, she remembers back to her childhood and one friend in particular, who was a cruel bully. The first years of Elaine’s life were spent in a nomadic fashion as her father, an entomologist, would be out in the field a lot, accompanied by his family. When he got a professorship at a university, they settled in a new Toronto suburb. Elaine had only ever hung out with her brother, so had to learn how to navigate school, female friendship groups, and other social situations. She makes a couple of good friends. For the first year, things go fairly well. The following summer, the family goes back to the wild for dad’s fieldwork. When they return, a new girl, Cordelia, has arrived and Elaine’s childhood becomes much more difficult. The book moves back and forth between Elaine’s experiences being back in Toronto and flashbacks to her earlier life. Through the flashbacks, the reader learns how she got to where she is in the book’s present. I loved this book.

The Edible Woman by Margaret Atwood (audiobook read by Lorelei King)
This is a very early Margaret Atwood novel, which she calls ‘protofeminist.’ It was published in 1969, although she wrote it earlier than that. In it, Marian, who is torn between her own wants and needs and societal expectations of women, becomes disconnected from herself and starts to identify to some degree with various kinds of food, which she then becomes unable to eat. Marian has around her people who are comfortable within stereotypical gender roles and those who rebel against them. She has a low-level job in a market research firm, which she does not expect to be a long-term career option, but it pays the bills. When she and her boyfriend become engaged, she begins to struggle with expectations others place upon her.

The Book of Extraordinary Deaths: True Accounts of Ill-Fated Lives by Cecilia Ruiz


I came cross this book when looking to see what was new in the e-book section of the library website. It sounded weird, so I had to check it out. It’s simply a collection of very short (a few sentences each) accounts of how various people died in strange and unlikely ways, beginning in the 6th century and going to the present. For instance, one guy beheaded his enemy in battle, tied his head to his horse as a sort of prize, and ended up dying when a wound inflicted by the teeth of the severed head rubbing against his leg became infected. A more recent example was of a guy who engaged in cock-fighting. His rooster stabbed him to death with the metal spurs attached to its leg. It’s a strange little collection that also includes artwork.

I'll continue the book thoughts tomorrow, as I welcome August. I hope July was good to you.

Your statements "Why am I allowing myself to be aggravated?" and "This has been great--freed up a lot of time" was an aha moment for me. I'm taking your lead and unsubscribing or adjusting the notifications of the groups I follow so I won't be getting so many notices. I recently joined a few recipe groups and am getting so many notices I started marking them as read before reading them.

It really was eye-opening to see how much time I had spent wading through stuff. The only social media site I have an account on is Facebook and I didn't think I spent that much time on it, but I guess it was more than I thought. I don't have (or want) a smart phone, so only viewed it when I had the computer on. I can relate to your recipe group experience.