Vintage Vintage, New Vintage, and How Mature Is It?

One of my staple foods is cheddar cheese. I use a couple of kinds, depending on what I'm doing with it. For eating with crackers, we like a sharp cheddar. When we lived in Oregon and Alaska, we loved Tillamook extra sharp in the black wrapper (I don't know if it's still in the same packaging at this point) and would buy the 2 pound block to keep in the fridge. Here, it's mature, not sharp, and it varies wildly. Extra mature is not sold in that many places. In Ballinrobe, we had a local Tesco where we could get it, but I've not seen it in a SuperValu, which is our local shop now. The shops in Moville didn't have it, but they sold a different brand of mature cheddar that was almost as good. When we had access to Aldi, we discovered that they had it, so we'd stock up whenever we were near an Aldi. At one point, a friend mentioned the vintage cheddar at Aldi, so we bought one of those to compare with the extra mature. Yum! We started buying the vintage cheddar. 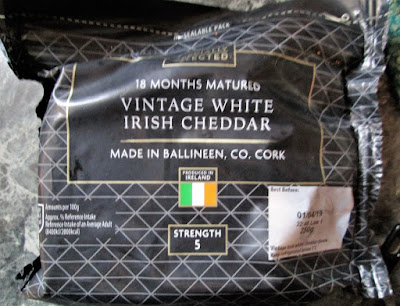 Then we came back here, went to Aldi after not being in one for a while, and discovered that the vintage we were used to was no more, but they had another, larger package of vintage cheddar and no extra mature. 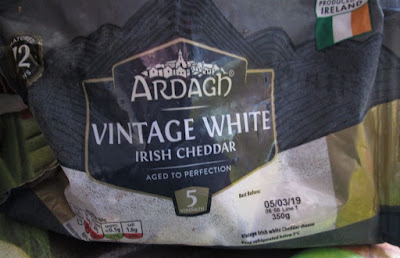 We bought that and were quite disappointed. The new vintage was nothing like the vintage vintage. It still had 5 for the strength level, but it wasn't even close--it wasn't crumbly or sharp. I still bought it, because I didn't dislike it, there wasn't anything better in the local shop, and it was useful to cook with. I wondered whether this new vintage was replacing the vintage vintage and the extra mature.

Then the Aldi in Donegal Town remodeled, started stocking some new products and changing others. When we went the first time after the remodel, they had both the vintage vintage and the new vintage, so I bought both. When we went the other day, they also had extra mature. 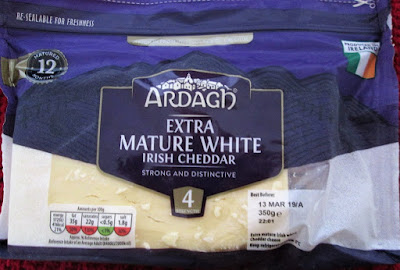 You can see from the picture that it's crumbly, and even though it gives a strength level of 4, it is stronger than the new vintage at 5. Both say they've been aged for 12 months. I skipped the new vintage and just bought extra mature and vintage vintage. I have no idea if all of these cheeses will remain in store in future. I guess I'll find out.

Another thing I hope they bring back is the bag of jumbo porridge oats. This was another item that I could only get at Aldi at times. Porridge is popular here and porridge oats are never in short supply, and they're great for, well, uh, porridge. I also use them in bread and pizza crust. But they're like quick-cooking oats in the US, so not good for toasting to make muesli or in the oat muffins I make. For those things, I need jumbo oats (like old-fashioned rolled oats in the US) and Aldi was where I got them. I always stocked up and when a friend would come to visit, he'd swing by and get some to bring me, so even when I wasn't near an Aldi, I had a supply. I was down to one bag, so put that on my list the other day. When I found the new oat location, I noticed that the price had come down by a fair bit. The bag looked the same, but I was suspicious, so read carefully. Sure enough, the small print that had said, 'jumbo oats' on the side was gone, and when I looked at the ingredients, it said 'oat flakes' instead of  'jumbo oats,' so I left them there. Fortunately, I was able to find some jumbo oats in our local SuperValu. I didn't really need them immediately, but there were only a few bags left, so I figured I'd better grab one. As we were paying, I noticed that the woman at the next till had a couple bags of her own. Hopefully, since they seem to be popular, they'll keep stocking them!

We have a fabulous cheese shop in our area.
Wish I could send you some Irish Cheddar . . .
Outstanding . . .
Went there before Christmas to purchase some cheese gifts.
The waiting line was amazing.
Five gals cutting cheese, preparing for customers.
The Cheese Lady . . . one of the best places in town.