Today we rode to Donegal Town with a friend and did one of our periodic 'big shops' where we stock up on various basic foodstuffs, especially heavier items. As we were at the till in Lidl, and the guy was about to start scanning, he waved his arm towards a spot behind me and said something that I could not quite catch. I was standing there, prepared to start hurling items into the trolley as soon as he'd scanned them--there is a tiny area where scanned items sit and we never bag things right there, but rather use the bagging shelf to do so after we've paid. It's easy to fall behind when moving things to the trolley once they've started scanning, so after the usual pleasantries--'I'm grand, and yourself?'--I focus on that. So when he said something that seemed to be about getting something for free because we'd be spending more than €30, I looked behind me and just saw what looked like an empty cardboard stand. The guy started scanning and I started throwing stuff into the trolley. When he was done, he repeated himself, more slowly this time, telling me to go to the stand and get a box of chocolates, which were free because we'd spent over €30. Somehow, the first time he said it, I heard everything except the part about chocolate. I am not sure how the heck that happened! Chocolate is usually not something that goes over my head!

I chose a box, the guy scanned it, and off we went. 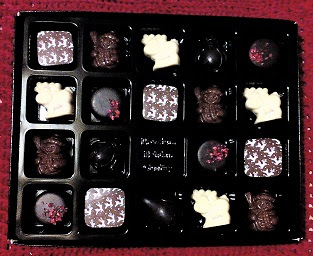 This was a nice little surprise, even if I did feel like a dork when I didn't understand the guy at first.

Hope there are some sweet surprises in your day, too!

Nice to have a surprise gift . . .
Although not fun feeling “like a dork” though!