The Unexpected Genius of Pigs and Other Books

Here are a few more of the books I read in November. We begin with the pigs!

The Unexpected Genius of Pigs by Matt Whyman
I was scrolling through the new e-books available at the library and came to this one. It was laugh-out-loud funny. The author and his family live in a semi-rural area, but not out in the middle of nowhere. They have neighbours. They also had chickens that were attacked by foxes and wanted to know what they could do about this problem. His wife did some research and found that pigs deter foxes. Further online exploration brought her to a person selling mini-pigs. They ended up with two of them. The learning curve was steep, especially when it became obvious that there wasn’t very much that was mini about the pigs.The author later learned that mini-pigs are not really a thing, but since piglets are small and regular pigs sell for £30 or so (according to him) and something marketed as a mini pig sells for upwards of £500, there is some cash to be made by calling the pig mini, even if it is going to grow up to be anything but! By the time they discovered this and called the breeder, that person was long gone and no longer in business. Whyman set out to learn about pigs, so spoke to scientists, other pig owners, and pig rescue people. The book is a combination of personal stories about his own experience with his pigs, stories from other pig people, and what science can tell us about pig evolution, biology, and behaviour. Glad I found this book! 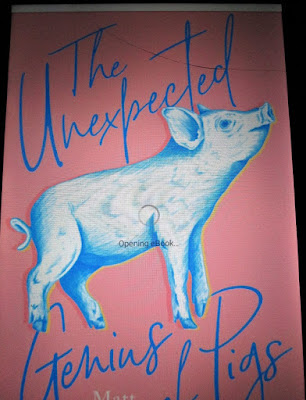 Nocturnes: Five Stories of Music and Nightfall by Kazuo Ishiguro
I found this book at a charity shop. The stories were good, if unsettling, and I found it to be an enjoyable read.

Birds Art Life Death: A Field Guide to the Small and Significant by Kyo Maclear
I came across this memoir while scrolling through the e-book section of the library website. This is the title as it appears there. When I went to the author’s website, the book was listed as Birds Art Life: A Year of Observation. The author is an artist in a creative slump who lives in Toronto. She is also a sandwich generation woman, who is trying to care for her ill, elderly father and her children while still working out ideas through her artwork. She grew up in a multicultural situation, with a British father, a Japanese mother, living in Canada. One day, she meets a musician who is an avid bird watcher and she asks if she can tag along with him for a year. She thinks that his attention to the birds and how he incorporates that into his life, might teach her some things. This book is an account of what she thought about during that year, what she learned, how she used the lessons to make sense of some of the issues from her childhood, and helped her understand herself, her artistic practice, and her family better. It's a quiet book, filled with quiet moments of reflection about creativity, love, nature, passion for something, and how we direct that passion.

Endless Night by Agatha Christie
This was one of The Guardian’s book club selections for November (the other being The Murder of Roger Ackroyd). I decided to read it again because of this. I was familiar with the story, but because I’d also heard radio dramatisations and seen a TV adaptation that had inserted Miss Marple, even though she is not in this book, I decided to read it again. The book is narrated by the main character, who is remembering what led up to the present. He was a jerk who met a rich girl and thought he had everything he wanted at last, but the menace grows as the book progresses and of course, things do not move along in the ways he thought they would. The book was published in 1967.

And so another week begins. I hope it has started off well.