We went out to do a couple of errands this morning and decided to call into the charity shop while we were out. We walked in and I saw something that warranted further attention. 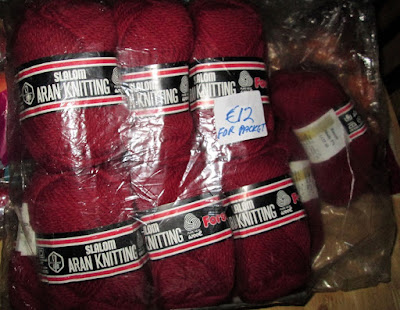 I counted skeins (14) and looked at the label for fibre content (100% wool). I'll take it! We had a look around in the book room and Bill found one to bring home. We went up to the counter to pay and the woman said she wasn't going to charge me €12 euro, because 'some balls are missing.' She asked if €10 euro would be OK. Since I was prepared to happily give her €12, I said that would be grand and put away one of the two euro coins I had in my hand.

Off we went into the mizzle. As we passed the small shop on Main St, I suggested we pop in for some eggs. We went in and stood there looking at the space where the eggs used to be. There was plenty of milk and butter, but no eggs. This is not a big shop--it's about the size of a postage stamp, but is a deli, off-licence (liquor store), and mini-grocery store all rolled into one. There were not that many places eggs could be. I wondered whether they'd decided to stop selling them, but we picked up a bunch of fruit that's on sale and went to the till, where I asked the guy if he had eggs. He said yes and showed me where they are now. They'd been removed from the refrigerator case and placed on a rack right behind where we'd just been standing! Duh! If we'd turned around, we would've seen them. Just goes to show how we get used to certain things. I'm used to walking in there and going straight for what I'm in there for.

It was always a bit weird that the eggs were in the refrigerator case, because they rarely are here. They're just on a shelf, which was another different thing to get used to at first. We were just so used to having them refrigerated. Egg production is different here, so egg washing of hen eggs for the retail market is prohibited. The Food Safety Authority of Ireland website says:
'...washing may aid the transfer of harmful bacteria like Salmonella from the outside to the inside of the egg. The priority in egg production is to produce clean eggs at the point of collection, rather than trying to clean them afterwards. The cleanliness of the egg should be assured by good management and hygiene of the poultry house, and by minimising the delay between egg laying and egg collection.'
In the US, conditions are such that eggs need to be washed and chemically sanitized before being put up for sale, which strips a protective outer coating from the shell. Once the egg is washed, and the coating is gone, salmonella can enter through the shell, so after washing in the US, they sanitize and then refrigerate.

I hope you find what you're looking for today and have a happy surprise or two besides!
Share
Posted by Shari Burke at 13.12.18

Enjoyed your “egg tidbits “ today.
Let’s see if this comment goes through.
10-15 tries on Bill’s and no luck!
Here I go!