Yesterday I mentioned that we might get some winterish weather. This did not materialize and there is no snow on the hills. After doing a load of laundry, knitting while the washing machine was doing its thing and hanging the wet laundry on the clothes horse to dry, I proceeded with my plan anyway--made a cup of tea and settled in with my cosy mystery, which I started in the wee hours of this morning, before attempting to sleep. When I woke up this morning, I thought this might be a lost day, since I had a stabbing sort of headache. I went back to sleep for a while and when I next awoke, it was gone, so I get a functioning day after all. Yay!

We got a flyer in the post for this store in Donegal Town that sells various electronics and home appliances. We don't have to worry about buying appliances, for which I am grateful, but I went through the ad anyway, just to see what sort of stuff they sell. Cookers, hobs, fridges, fridge freezers are all different than the ones that are common in the US, with the exception of the 'American-style fridge freezer' which is huge compared to all the others in the ad. This time I was particularly struck by the cookers, which run from the small fan ovens like we have, to some pretty intense (and expensive) combination appliances. One has a 5 burner hob, three different ovens, and a grille oven. There's a main oven, a small fan oven, and a third oven. 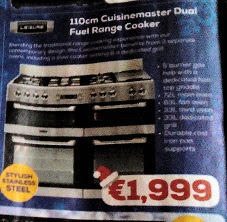 If this behemoth was installed in my kitchen, I'd have no counter space left!

We don't get many ads here, but there are a few more at this time of year. It's interesting to look through them sometimes and see what sorts of things are sold. We rarely go into a store besides a grocery store or charity shop, so this gives me a window into a certain aspect of the culture I wouldn't get otherwise.

I'll be getting back into my book shortly. In the meantime, here's the final installment of my November book list.
Armistice: A Laureate’s Choice Of Poems of War and Peace edited by Carol Ann Duffy
The title says it all. Here’s an example of a short poem she included:
Christmas:1924
‘Peace upon earth!’ was said. We sing it.
And pay a million priests to bring it.
After two thousand years of mess
We’ve got as far as poison gas.
Thomas Hardy

Beneath the Skin: Great Writers on the Body by various authors
I found this book while scrolling through the e-book section of the library website. I was intrigued, so downloaded it. What an interesting collection of essays this is! Each author chose a specific bodily organ, researched it, and wrote about it. All the essays contained both personal anecdotes and explanations about the organ and its function. Some referenced  literature and poetry as well. I found the book fascinating and I’m glad I decided to give it a try!

A Dark Time by Sophie Hannah
I was reading through the posts on a Guardian Book Club web chat about Agatha Christie (her books Endless Night and The Murder of Roger Ackroyd were the November selections) and Sophie Hannah, who was the guest and author of the Poirot continuation series. In one of her answers, she commented about a series she writes and the requests she gets for more of them. She’s written some stand-alone books since the last one in the series came out. She said that the next novel in the series is coming next year and following that will be a collection of stories. In the meantime, though, there was a link on her website to a novella featuring the two main characters that could be downloaded for free. So of course, off I clicked to get the pdf. If you’re interested, the link can be found on this page. It takes you to an ADT (home security company) page and from there you get to the pdf.

Sea Garden by HD
A collection of poetry by HD (Hilda Doolittle) that I downloaded from Project Gutenberg.

Moments: Irish Women Writers in Aid of the Tsunami Victims edited by Ciara Considine
I picked up this short story collection in a charity shop in one town or another. It was published in April, 2005 and at the time, the entire €10 purchase price went to aid victims of the December, 2004 tsunami. The writers whose work is collected here are varied in style and subject matter, although the thread that runs through all the stories is the idea of change in some form. It’s a nice collection that I enjoyed very much.

Hope it's a quiet, cosy day in your neck of the woods!

Happy that headache went away . . .
Mystery books are difficult to put down . . .
Once in a blue moon, I look at the paper ads.
Never once have I rushed out to purchase.