Unicorn Giggles Hot Off the Hook!

This afternoon I finished a cowl that has been floating around in my mind for several months. 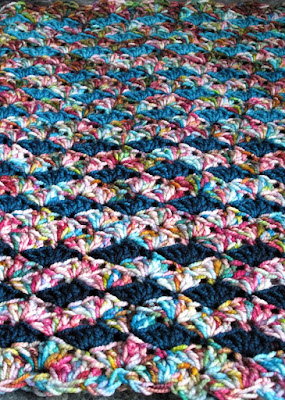 A friend sent me some lovely yarn for my birthday last year, some of which was this set: 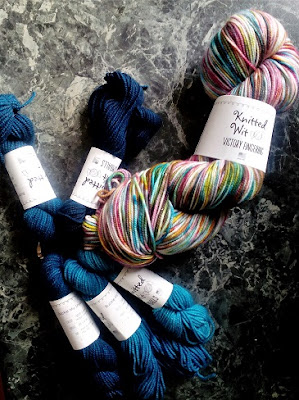 The colourway of the large hank is called 'Unicorn Giggles.' 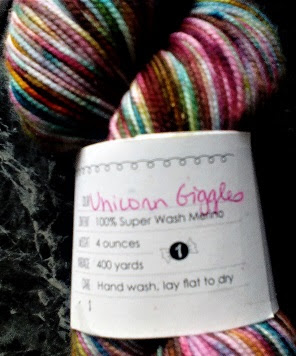 As soon as I saw it, it told me it wanted to be a cowl and that the stitches should be curvy in some way. I would think about this as I was working on other projects. We were in limbo then, thinking we might be moving, but not knowing where or when. I was working with yarn I had on cones so that I wouldn't have to pack them. Then we did move and it was hot, humid, and not really the time to be working with my wooden hook and wool. I told myself that I would save the yarn and the project for the cooler weather of September. This was something to look forward to and to distract me. I could let my mind wander as I considered how I would make the cowl and when I was doing that, I wasn't thinking about my discomfort in the heat. I thought about knitting it, but decided I wanted to crochet it. I went through my stitch dictionary, narrowed it down to chevrons or shells, and chose the shells. I knew I wanted it to be tall, but not too wide, because I wanted it to sit around my neck without hanging down, and also tall enough to pull it up over my face and ears if I need an extra layer. I briefly considered making a scarf that could be wrapped several times, but no, it wanted to be a cowl.
The other day, I was ready to begin, so I wound the yarn as I listened to podcasts. Then I began swatching. The yarn is a fingering weight (#1) it says, but it's a bit heavier than most sock yarn of the same weight. I swatched with G, H, and I hooks and ended up going with the I (5.5mm). Normally with fingering weight, this would be too big, even though I'm a tight crocheter, but this yarn is slightly heavier and the resulting fabric is so wonderfully squishy and soft.

The small hanks are gradients and I decided to go from darkest to lightest. There were 5 hanks, but 2 were the same shade, so I set one of those aside. I did a series of foundation dc (in US terms) that was long enough to go around my head, but not too long. Then, using Unicorn Giggles, I did a row of the shell pattern in the sides of those stitches. It's simply sc and 5-dc shells alternating, with a couple of spaces in between to start, then just make the shells in the sc and sc in the middle dc in the shell. I wanted to work in the round, so at the end of the first row, I brought the beginning end around to where I was and kept working, then I used the tail from my beginning slip knot to sew the small space closed as I was weaving in the ends. Making the first row of stitches flat and then joining is much easier when making a long chain to begin--at least I find it so. It's less awkward and I don't have to worry about twisting. 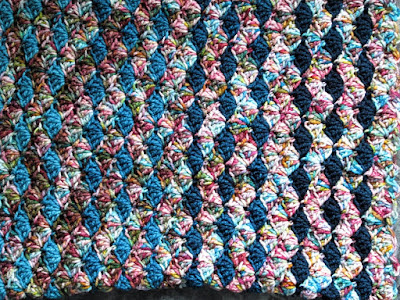 This just makes me happy! I love the way it looks. The colours are gorgeous, the stitches work well with them, and it is exactly how I wanted it to come out when I started. If the cooler weather ever comes, I suspect I will be wearing this a lot. And if it doesn't, I'll just sit and look at it and squish it. 😀

I hope there's something making you happy today, too!
Share
Posted by Shari Burke at 13.9.18