I had some yarn leftovers when I finished my cowl the other day. I had a ball of the multi-coloured Unicorn Giggles colourway, a mini hank (45 yards) of one of the blue gradients that had been duplicated in the set, and some small bits of the other gradients. I looked at them and thought, 'Hat!'--as you do. So I took the mini hank (which I'd already wound into a ball) and the same 5.5mm hook I used for the cowl, and began making a series of foundation double crochets. I kept placing the strip around my head until it was the size I wanted--the two ends meeting when slightly stretched. Then I made half double crochets (hdc) along one side. When I was at the end, I brought the beginning around to form a ring and kept on making half double crochets, around and around without joining at the end of each round. When working in the round, by inserting the hook for each stitch in the very back loop of each hdc, the front two loops get pushed forward. I like the way this fabric looks, feels, and behaves and I've used it a lot, especially for hats and sock cuffs.
When I reached the end of the blue, making sure I had a long enough tail to weave in well, I switched to the Unicorn Giggles and did a few rounds of that, before switching to a scrap ball of the gradient. I did this all the way up the hat. I did not worry about where the blue/teal stripes ended. I wanted to use as much of the yarn as possible, so I switched colours wherever necessary when I reached the end of a scrap ball.

I happened to be working on 72 stitches, which was convenient when it came time to decrease for the crown. I usually do 6 or 8 decreases per round on hats like this, so I could simply begin by placing a stitch marker at the beginning of the round and proceed to make 10 hdc and then hdc2together all the way around. On the next round, I did 9 hdc before hdc2together around. The next round was 8, and so on. I stopped after I did a round of 1 hdc, hdc2together around, then, leaving a long tail, cut the yarn, threaded the tail into a tapestry needle, wove the tail through the few remaining stitches and cinched the top closed.

If the number of stitches had not been divisible by 6 or 8, I would've done a round of evenly spaced decreases to get to the number I needed. 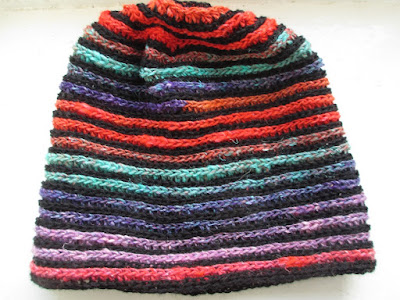 You could opt for a crocheted ribbing to begin, instead of the foundation dc, or you could begin with a regular chain. Make the hat as tall as you want it--longer for a roll brim. I have a hat I made like this using aran weight scraps and a 6mm hook. I roll up the brim most of the time, but when it's particularly windy, I pull it down and it covers my ears nicely.
To add a bit of texture, I sometimes do a random round of dc.

Even after making the tall cowl and the scrappy hat, I still have a small scrap ball of Unicorn Giggles left to be used in some other scrappy project.

Now to decide on the stitches I want to use for the next project. I'm going to starting playing with the gigantic cone of rust-coloured yarn a friend recently gave me. I've already had fun considering what to make and thinking about how to make it. More fun to come in the making and wearing! 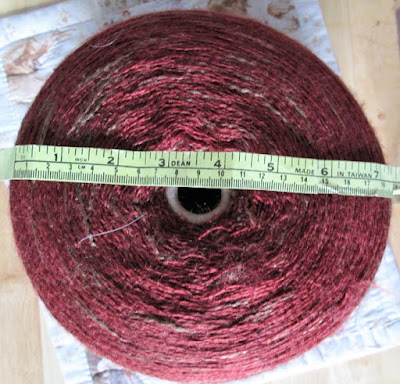 I hope there are fun things happening in your world today, too!

I like reading your knitting techniques . . .
Sassy hat indeed!

It is our Muskegon Michigan Irish Music Festival weekend
so we have been having great fun listening to music.
One of the wonderful groups from Ireland, The Conifers,
has been our favorite this year, a festival initiative winner.
They are a five piece band from the University of Limerick who play
traditional music and they were the winners in a high level competition performance in Ireland.
There were 27 groups this year performing on seven stages, at different times, for four days.
Our 19th annual festival. Great music and food and several other entertainment venues.