It's a lovely lazy day here today. I've already finished a piece in a larger crochet project I have ongoing and will probably do a bit of tatting later, possibly while listening to a podcast or some music. I might knit the heel flap on the sock I have on the needles. I plan to read and drink tea. I had some yoghurt in the yoghurt maker overnight, but it has to sit for 24 hours before it gets strained, so there's nothing to do with that today. I will make more bread tomorrow, but for today, we have enough. There are leftovers for supper. Today, nothing is required of me. I try to keep Sundays as such days. I find them quite refreshing.

Here are the rest of the books I read last month--on lazy Sundays and every other day!

Craeft: How Traditional Crafts Are About More Than Just Making by Alexander Langlands
This is the back cover of the book, which has an excellent summary of this wonderful book. 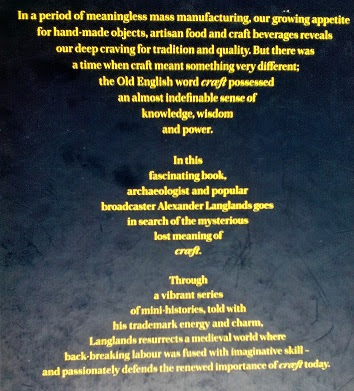 He is writing here about an older meaning of the idea of craft than how we think of it today. He discusses making things (like stone walls, baskets, etc) and doing things (growing, keeping animals, etc) in ways that work with the landscape/ surrounding area instead of just bringing in heavy equipment and tearing the ecosystem apart to extract things or building with materials that are not up to the job. I was surprisingly interested in the chapter in concrete, for example, and how it is not 'breathable.' I had a whole new way of thinking about our time in a mold infested apartment in an old building that had been renovated using modern building materials. He's got a lot of respect, as I do, for people who have the knowledge and skills to make things work using what is around them, understanding that things are interrelated.
This is a book that I originally borrowed from the library, but a couple of pages in, I knew it was one that I would like to own. I am glad I get to keep it and there are lots of underlined passages and notes in the margins.

Strangers on a Train by Patricia Highsmith
I’ve only read one other Patricia Highsmith book and that was one I picked up at a charity shop a couple of years ago. I’d heard a lot about her on various books podcasts and knew she was a bit dark in her outlook. Recently, Bill and I were talking about books and stories made into films by Hitchcock--I may have seen some of these, but have no recollection of them, as I do not enjoy movies and don’t bother with them, unless it’s a documentary on a topic which interests me. Anyway, this book came up in conversation, so he requested it from the library. The basic plot is that two strangers meet on a train--one a troubled alcoholic rich kid with a fixation on his mother who feels like his father is always picking on him and the other an up and coming architect who is married to a woman he’s been separated from years before and who is pregnant, having taken up with various men over the years. The troubled alcoholic is pushy and won’t leave the architect alone. The latter drinks too much and talks about his wife and how he wants a divorce. he plans to marry a politician’s daughter once his career is off the ground. Pushy alcoholic comes up with an idea that he should kill the wife and the architect should kill his father and no one would know. Architect wants nothing to do with this plan and thinks he’s rid of Pushy Alcoholic, so goes off the Mexico with fiancee. He gets a bad feeling when the wife is murdered. he is not keen to become a murderer himself, but PA engages in some serious mind games with him. I am not sure how I felt about this book.  On the one hand, I did find it to be a page-turner after a while, although it was slow in the middle. But it was sort of creepy, which is what the author was after, I suppose.

Rain: Four Walks in English Weather by Melissa Harrison
In one of my book emails, a recent novel by this author was mentioned. It sounded good, so I looked it up at the library. It didn’t come up, but this book did, so I requested it. I am quite fond of rainy days and walks, so I was looking forward to it. It’s a slim volume, but she packs a lot in--from observations about the landscape during and after rain, to the effects of rain on plants and animals, to the history and geology of the landscapes she is walking through. If you are a fan of nature and being outside, this is a great book to read.


When Last I Died by Gladys Mitchell
This is one of the author’s Mrs Bradley mysteries, of which there are 66! I vaguely remember watching a series years ago on PBS with (I think) Diana Rigg in the title role. I don’t think I watched more than one or two of them. Then I listened to a dramatization on BBC Radio 4 at some point, but again, didn’t feel the need to go further. I found this a bit surprising because I am usually quite a fan of this kind of character, setting, and genre and Mitchell was a contemporary of Agatha Christie and Dorothy L Sayers. I like much of the work from that era. I came across this book in the e-book section of the library website and decided to download it. I was pleasantly surprised! The TV and radio versions didn’t grab me, but I enjoyed the book a lot! So now I have a whole series of books to dive into. This one comes farther along in the series and it was no problem to come in at that point. There’s one more novel and a collection of Christmas short stories in e-book format and I will probably go ahead and check those out, but I’ve also placed the first two novels in the series on hold. The librarian expects them to come in on Tuesday, so I’ll start from the beginning and go from there.

I hope you're enjoying a peaceful day today, wherever you are.

A friend of mine . . . retired teacher . . .
reviews books for a publishing company . . . to earn a bit extra money.
Sounds promising to me . . .
Except not sure how I would feel
having to review a book or two that I am totally not in to!